For the past several months, when I’ve asked a question to all of you, I have had to just optimistically hope that you were nodding or raising your hand. Not today! We are back together for our first official Sunday of in-person worship and I am thrilled. So, I want to ask you a question and I want to see your actual hands go up in the air. How many of you ever ran for a class office? In school or college or even something within an organization or community. Alright, interesting. I have never run for an office or anything like that. The closest thing might be the fact I am the secretary for our homeowner’s association. But for those of you that have run for some kind of office, I’m willing to bet you had a few campaign promises or Precious Platforms that mattered to you.

It is no secret to anyone that we are in the midst of an important political season right now. From the last few months, we have heard from several different candidates regarding what their platforms or promises would be, should they have the chance to serve as our President. It is a far cry from the things we all likely remember hearing from our fellow students who wanted to be class president back when we were in school or college. I can remember, when I was in middle school, the campaign promise that sealed the election for one of my fellow 8th graders was that the student body would have the right to select the DJ and the music for school dances. Other would-be class presidents have championed several other pressing and dire needs for their constituents. Increased time for recess, more vending machines, even that the cafeteria start serving Pizza Hut pizza instead of the generic stuff that typically filled the tray. Simpler times, my friends. Simpler times. But each of those candidates, whether they were in grade school, high school, or even on the docket for a party primary, all of them are Setting the Stage for what they would do if they held office.

This morning, we start a 3-week message series called “Precious Platforms” that is focused on the swirling political realities we all find ourselves within. I know, I know. They tell you basically from the moment you leave the kiddie table and join the grownups for dinner that there are two things you never talk about: religion and politics. Well, we’ve been talking about religion for the full 150 years we’ve been a church, so why not just take the plunge and tackle that other taboo topic. To be very clear, the focus and content of this series are not centered on the opinions or values of political parties or the validity of any particular candidate. Instead, I want us to ask a different question: In this time of political awareness and debate, how can we serve to be the presence of the Savior we know loves every person regardless of political opinion? To do that, I think we need to hold to three Precious Platforms: Prayer, Presence, and Attitude. This morning we start by exploring the posture and power of prayer. Prayer has a potency that is as impactful as it is ethereal, as personal as it is common. Prayer is truly the means by which we go about Setting the Stage for how we understand and engage, not only this charged and confusing season but our full experience in this world. Our text this morning actually offers a pretty clear and direct connection between the political powers that be and our own practices of prayer. We’re in 1 Timothy 2:1-7.

In this text, we are given a glimpse into the heart of advocacy, ministry, and mentoring that the apostle Paul possessed. Paul is writing this letter to a young, pastoral leader named Timothy, who is fostering and overseeing the church in the city of Ephesus. This group of Christ-followers in Ephesus were still very much in the early development of their devotion and practice. They wrestled with competing belief systems, common but arduous social circumstances, and political structures that were disconcerting and divisive. Sounds familiar, doesn’t it? And one of Paul’s very first points of emphasis is that of prayer.

Paul is clear and impassioned in his direction to Timothy and, really, to all of us as Christ-followers: Pray! The word we read is that Paul urges Christ-followers to pray. That word in Greek, Παρακαλώ, possesses an important diversity in meaning. Yes, it can mean urging. It is also used in the New Testament to express the action of begging or imploring as well as to encourage and comfort. Paul is employing all of those meanings here. The command to pray comes with a sense of urgency, admonishment, and compassionate concern. The followers of Jesus need to be a people of prayer, then and now. It is an exercise and function that is under-utilized and too often ignored. John Calvin calls a spade a spade in his commentary, saying, “We know how sluggish we are in this religious duty.” Prayer, also, is the means for the Christ-follower to find the safe harbor they desperately desire amidst the tempest of life. For all these reasons and more, Paul is urging them and us to pray.

But the who is what forms the connective tissue between the spiritual discipline of prayer and the present political realities. Paul says, “all people” and then offers this first clarifying example of who that includes: “kings and all those in authority.” Paul ignites the need for prayer and then immediately offers who the recipient of that effort should be. Our political leaders. This labor, of praying for those in positions of political power, is so important in the eyes of Paul that it is his first word of direction given to the young pastor, Timothy. The truth, as we will come to discover, is that Paul is Setting the Stage for something much more reaching and redemptive by offering this instruction. This urging is connected to the identity of the Christ-follower in a critical way. Philip Towner noted translation scholar and New Testament professor, clarifies and says, “Within this setting, prayer ‘for kings and all those in authority’ cannot be severed from Paul’s conception of Christian existence as witness and service in the world.” So there is something here in Paul’s teaching that denotes the more foundational and holistic identity of a Christ-follower. Still, that likely doesn’t stop us or anyone else reading these words in any period of history, from turning up our nose at the idea of praying for a political leader.

One need only lightly broach the subject or peruse someone’s social media page to learn what some people think of particular politicians. That’s exceedingly true right now, as we near the presidential election, but it is a reality at any time and in any decade. I can recall some of the disparaging and ugly things people have said about the presidents that I have served in my lifetime. Bill Clinton, George W. Bush, Barack Obama, and Donald Trump. The recent debates between our presidential and vice-presidential candidates have ushered forth no shortage of these kinds of venomous words from both sides of the aisle. But Paul’s admonishment and urgent pleading to the church in Ephesus isn’t that they pray for the kings and authorities that they agree with. Rather, it is simply to pray for those in authority.

I know what some of you are thinking: “How can I pray for that person?!” It doesn’t matter what office they hold, what party they align with, what causes they champion…there seems to be a universal ability we all possess that allows us to villainize any politician. But the time and context of Ephesus and Paul and Timothy shines a little perspective on this reality and that question of how we could possibly be expected to pray for so-and-so. When Paul wrote these words, the current emperor in power was none other than Nero. Nero is one of the most heinous and brutal political leaders that God’s people have ever suffered under. Nero was known for violent and appalling torture and persecution; it was under Nero’s bloodlust against Christ-followers that both Paul and Peter were executed. All that is to say this: If Paul can look to the seat of leadership and see Nero and still urge the followers of Christ to pray for their political leaders, we today have little ground to stand on should we presume to declare our own political leaders are undeserving of our prayers. I’ll share the words of John Calvin again, this time with him saying, “Indeed, the depravity of men is not a reason why God’s ordinance [to pray] should not be loved.”

But I mentioned earlier that Paul’s admonishment for prayer seems to actually be a means for Setting the Stage for something far more reaching. This becomes the reason why prayer is one of our own Precious Platforms in this time and place. Paul pivots from the urging to pray to the striking and life-changing truth he shares in verse four that God “wants all people to be saved and to come to a knowledge of the truth.” And the means for that introduction to truth and salvation, Paul goes on to say, is the mediator between humanity and our God. None other than Jesus Christ Himself. For Paul, the urgency of prayer is not founded on spiritual obligation or in some divine effort to thwart or defy the ruling powers that be. No, prayer, Paul believes, is one of the primary means by which others around us can and will encounter the risen Jesus and be given new life. Prayer is one way in which God Sets the Stage for redemption and hope.

Friends, this is why I am urging you to pray during this charged political season, to pray for our leaders. Both now and after the election. If prayer is a result of God’s great grace, then we cannot determine to withhold it from those we disagree with. And what’s more, your prayers have the power to do mighty things. Your prayers could be the means in which God shapes your own heart and discernment at this time. Your posture of prayer could become an example and a compelling witness to others who are still trapped within the common and caustic cycle of cynicism and attack that is all too familiar to our political landscape. As the people of God, we believe prayer has power. It’s why we pray in the face of medical emergencies, natural disasters, and painful personal tragedies. It’s why we pray for the safety of our children, for the state of our communities, and for those relationships most precious to us. If we believe in prayer enough to bring it into those circumstances, then we should absolutely utilize it within this contentious political period. We have no way of measuring just what our great God could do with our fervent and passionate prayers. We know and profess that our God is present in this world, that greater things are yet to come and that we have the blessing of getting to be a part of that. Our prayers, including those offered for our political leaders, is one of the ways we can contribute to bringing God’s kingdom to this place and to Setting the Stage. 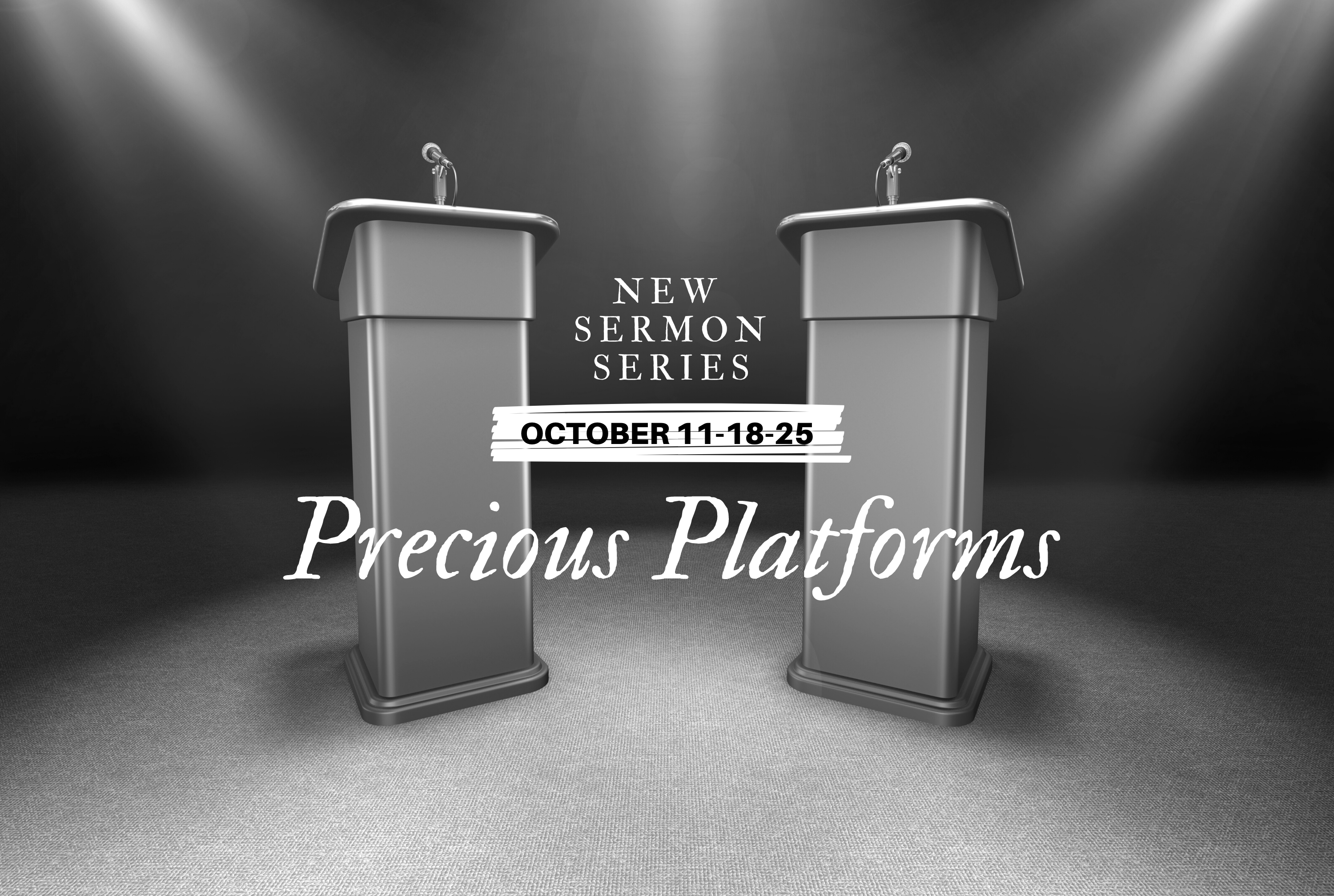 10am In-Person Worship
10am Live-Stream Worship