This morning we are kicking off a brand-new message series called Strangers No More. The premise is simple but important: At one time or another, we are all strangers. Whether it is moving into a new neighborhood, our first semester at college, or even just having a conversation with a cashier behind the register. Our relationships, even the ones most precious to us, begin with a distance that is eventually overcome. One of the best examples of this, I think, is marriage. In my opinion, marriage is one of the most stunning and shocking things God has ever fostered. In the covenant of marriage, two people are brought together in the most intimate and impactful manner we can think of. Two people who are filled with hopes and affection. Two people who have past experiences that have shaped them. Two people with bad habits and rough edges. And God’s plan in the covenant of marriage is to take these two flawed, excited, anxious, unique people and put them together in the most vulnerable, sensitive, challenging human relationship there is. But before that covenantal promise was made before God, before they started dating, every couple was at one point or another - strangers. Strangers with first impressions.

This past week I took to my Facebook page and I asked folks to share what their honest first impressions were of their spouse. I made it clear, the cute stories are fine and all but, what I was looking for was honesty. The responses did not disappoint. I don’t have time to read them all, but I’ll share a few that stood out:

My own wife even joined in the fun. She wrote, “I thought he was a teacher’s pet and a know-it-all. And one of those annoying people who asked a question when the professor was otherwise ready to dismiss the class!” To be fair, when I first met her, I thought she was kind of a stuck-up snob. Turns out she was more right than I was. But the best part of each of these comments is that they were only the first of many impressions and memories these couples created together. They are Strangers No More.

And that is the focus of our series. We will spend a couple of weeks exploring accounts within Scripture where an outsider or stranger was brought into the fold of God’s people and given a new identity and new purpose. In each of these stories, we have the opportunity to find a connection both to the stranger given purpose and place as well as the ways in which we participate in God’s work of inviting the stranger into the community of God’s people. And we begin this morning with the account of the woman named Rahab. We heard the first part of her story a few moments ago. It continues in Joshua 6:22-25.

Rahab’s story is a really fascinating one, and more to the point, I feel like it’s a very important one for us. It’s funny, the events surrounding the walls of Jericho has become a Sunday School favorite and even made into a song or two. But that incredible tale of victory and conquest would not have been possible without Rahab - who, for reasons we can likely guess, is often left out of our retellings. But Rahab was the lynchpin to the whole operation.

The spies, part of the nation of God’s people, were doing what they had been told by God to do. They were seeking out the land that the Lord had promised for them and, in that work, had encountered the formidable city of Jericho and its seemingly impenetrable walls. But they make it into the city and encounter Rahab. While staying in her home somehow the king of Jericho learns of the spies within his city and sends soldiers to capture them.

Rahab is crafty and resourceful though and hides the two Hebrew spies and sends the soldiers on a wild goose chase in an attempt to catch them. Then, in the middle of Joshua 2, Rahab makes a profound proclamation of faith in God. She recounts what all had heard of the parted waters of the Red Sea and the astounding military victories. She says, “the Lord your God is God in heaven above and on the earth below.” The spies assure Rahab that her and her family will be protected from the coming attack. Then, down come the walls of Jericho, Rahab and her family are kept safe, and we’re told in Joshua 6:25 that Rahab went on to live the rest of her days within the community of God’s people, that she had been given a Fresh Start.

Rahab’s story is an important one for us as we begin considering what it looks like to bring others into the fold of God’s people, what it looks like to remove the label of stranger from another. That redemptive, empowering work absolutely must begin with the willingness to see others, not with the eyes and labels of this world, but with the eyes and affection of God. Why is Rahab often left out of the Jericho retellings? It’s because of the title she is given that, for whatever reason, is deemed the defining attribute of her identity: prostitute. Even before we read her name, Rahab is identified by what she does, not who she is. Never mind the fact that Rahab likely had little choice in engaging in that line of work. Never mind that the number of available opportunities to simply live in a city like Jericho often numbered in the likes of maybe four or five. Lynn Japinga, professor of religion at Hope College and an ordained pastor in the Reformed church, just recently published an awesome book called “From Widows to Warriors: Women’s Stories from the Old Testament” and in it she offers some really important perspective on Rahab. Regarding Rahab’s line of work, Japinga says, “Prostitution was the last resort for desperate women, who had few ways to support themselves if they did not marry. Rahab’s career ‘choice’ (and Japinga is quick to clarify there was likely very little choice at all) came from her need to survive and support her family.”

We have all been slapped with labels. Whether others try to pass them off as friendly teasing or if they are indeed intended to be weapons meant to harm us, those labels and names have power. No one actually believes it when they say, “Stick and stones may break my bones, but words will never hurt me.” Those words do hurt, and it is because those words represent the way others think about us. Those labels could be connected to something from our past, some aspect of who we are, or some assumption made about us. Regardless, they all achieve the same result: Those labels, names, words, they alienate us. They isolate us. They make is strangers. They take people created in the image of God and attempt to relegate them to a place where they can be belittled, ignored, or written off. They take an incredibly brave woman like Rahab and attempt to corner her in the confined space of a prostitute. But that’s not what God does and it’s not what God wants. Returning to Lynn Japinga’s words in her writing about Rahab, she says this: “The good news is that God does not call us by those names. God sees the pain those names cause. God knows that human beings are worth infinitely more than their negative labels. The good news is that God uses a new vocabulary and gives us new names. God calls people ‘beloved’ or ‘God’s own people’ or ‘saint.’ God sees the gifts and graces in people and calls them by those names.” My friends, if we really want to call ourselves followers of Jesus, we must do the same.

In Jesus Christ, we have all been given a Fresh Start. By His death on the cross, all of the darkness and selfishness and sin within us is washed away. The prophet Isaiah shares it beautifully: “Though your sins are like scarlet, they shall be as white as snow.” Jesus offers us new life, new identity, a new promise. In Christ, all those labels that weigh us down and sap our strength are erased. In Him, we are not defined by our past, by our mistakes, by our fears, by our careers, by our appearance, by our age, by our weaknesses, or by what the world sees. We are defined, instead, by the grace and mercy and affection of the One who made us.

It’s time we offered that same life-saving gift to others. That surge of joy we feel when we first hear or remember that our identity is shaped by the heart of God and by not by human voice or opinion, that is a gift we can offer to others. You want to help someone feel like a Stranger No More, then show them that you see more than what others have told them. Show them, with your words and your actions and your time, that their value is not something that has to be earned but is, instead, something inherent and written within them. Show them that it doesn’t matter what others have said about them, that it doesn’t matter if they think differently than you do, that it doesn’t matter how old they are what or they look like or where they live. Show them that, because of your own belief in the heart and work of Christ, that none of that matters and that, as far as your concerned, you’re more than willing to give them a Fresh Start. 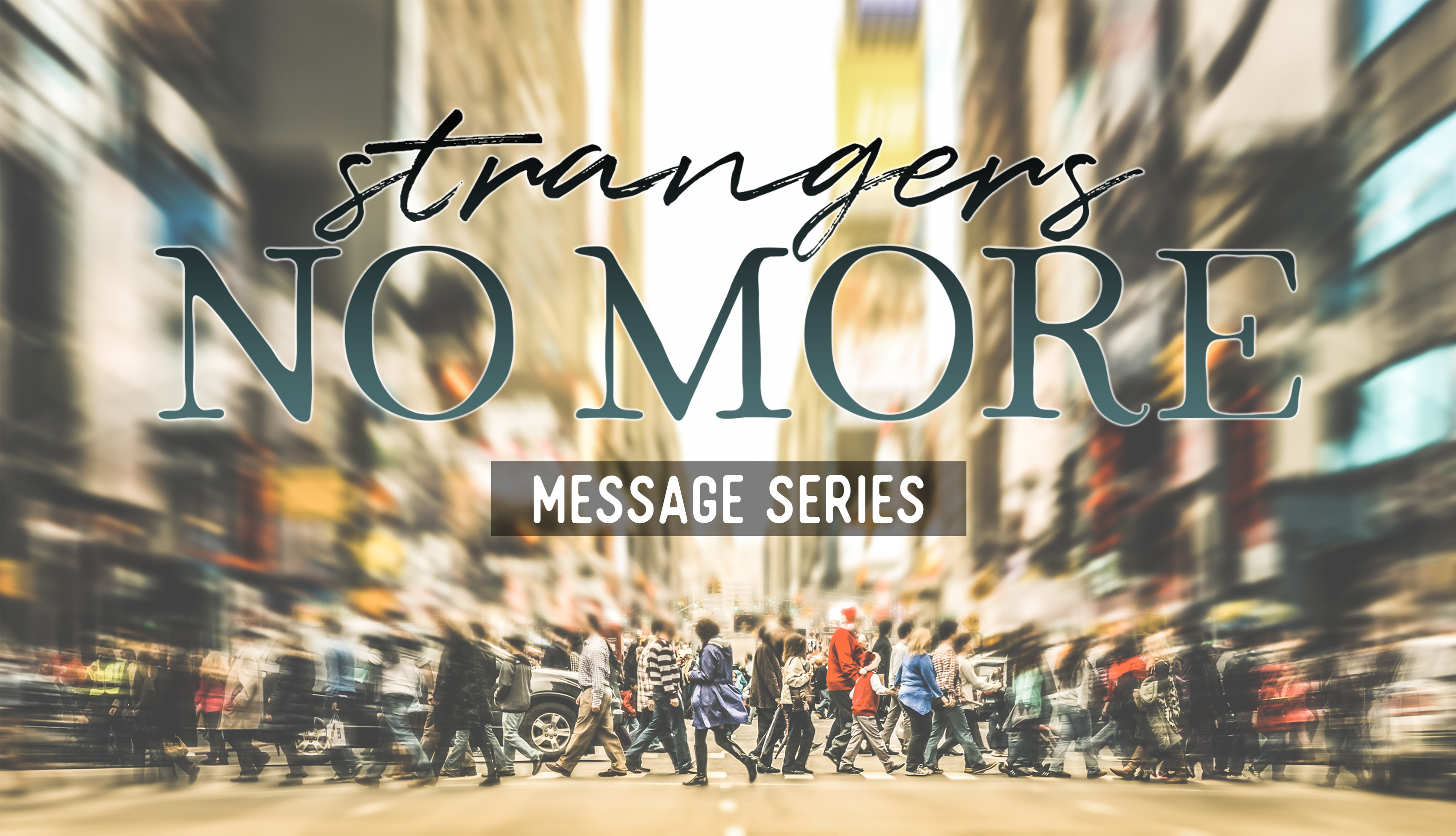 More in Strangers No More

Strangers No More: Closing the Distance