I wonder how many of you enjoy courtroom dramas. A judge behind the stand, lawyers wielding words like weapons, a defendant who could be innocent or guilty, the critical but often unknown jury. It’s funny, you wouldn’t think that turning a legal proceeding into a film would be successful but there’s something about that genre that is compelling, right? Over the summer, Caitlin and I watched the drama “Defending Jacob” and the film “Just Mercy” together. My wife and I have very different tastes in books, movies, and television. But courtroom dramas seem to be one of the few things that joins Harry Potter, Pixar and Remember the Titans within that elite Venn-diagram of what we both like. I think a big reason why so many of us enjoy those courtroom legal dramas is the combination of passion and suspense. Whether it’s a lawyer offering their closing statement, cross-examination of a witness, or an impassioned plea from the defendant…there’s emotion and energy there that you can’t really capture in any other setting. And we are left in suspense as we wait to find out what the decision will be as life and sometimes justice itself hangs in the balance.

But it’s not just the courtroom where folks are told to, “State Your Case”. It might not be fostered within the dire circumstances of a jail sentence, but we all have several of those experiences in our lives. Whenever we have tried out for a team, the coaching staff gives every athlete a chance to State their Case for why they deserve a spot on the squad. A job interview is essentially an employer sitting you down and telling you to State Your Case for why you deserve the position you’re seeking. These experiences can be exceedingly public, like when we make the ill-advised decision to try and debate someone on social media, or they can be private and personal.

I’ve had several job interviews in my life and written a couple of academic applications. While I’ve never been in a courtroom type of scenario, there was one moment that really stands out to me as a State Your Case type of situation. It wasn’t in front of a judge or an employer or a coach. It was in front of my in-laws. Call me old fashioned but before I proposed to Caitlin, I wanted to ask for her parents' blessing. I was so nervous. Caitlin and I were spending a few days at her parents’ house and I knew I wanted to ask then. I waited until a night when Caitlin went to bed a bit early and then asked her parents if we could talk. To be honest, I don’t remember much about the conversation other than that we were in their kitchen, I had to keep my hands in my pockets because they were shaking, and that they eventually said yes and gave me their blessing. More than a decade later, I can still remember how nervous and anxious I was surrounding that moment because it felt like so much hung in the balance.

This morning we are finishing our journey through the book of Acts and we’re doing so by looking at the final words recorded in the book. They revolve around Paul, the one-time Pharisee and bounty hunter now turned Christ-follower and missionary. If you look back, Paul’s journey after committing his life to Christ has been anything but simple. What began in literal blindness has continued with miracles, imprisonment, life-changing friendships, and even (as we saw last week) a shipwreck. Now, in these final recorded moments written by Luke, Paul has one last chance to share about the Savior who changed his life. At the end of Acts, Paul has a chance to stand before the Jewish leaders in Rome and tell them about Jesus. It is a State Your Case moment if Paul ever had one, and it is found in Acts 28:17-31.

This is the last recorded account we have of Paul before we are brought into his letters to the various churches throughout the region. Knowing what Paul has endured to get to this moment…arrest, trial, imprisonment, and particularly dangerous voyage across the Adriatic Sea…you get the sense that Paul had been waiting for this very opportunity for quite some time. We learn that an aspect of Paul’s own freedom is tied up in his desire to stand before this group of Jewish leaders but that it is not Paul’s own interests that seem to be his primary concern. In fact, Paul spends very little effort at all stating his own case. Instead, he shares about the life and truth of Jesus Christ.

The response from the Jewish leaders is an interesting one and likely the best Paul could have hoped for. They clearly have received word about the changes that have occurred in Paul’s life. They admit that they have not heard anything incriminating or disparaging about Paul but they have heard about his fascination and dedication to this new religious movement, what they call a sect and we call our faith. They give Paul the open door you have to assume he was praying for. They say to him, “People everywhere are talking about this new movement. We want to hear about it. State Your Case.”

So that is exactly what Paul does. From morning till night, in fact. Paul spoke about the kingdom of God, about the law of Moses and the prophets. Remember, Paul was first a Pharisee before he was Christ’s emissary. Paul knew exactly what to say to these religious leaders in order to ensure that they would listen with attention and curiosity. Paul then deftly wove together the connection between the promises of God in the Old Testament to what had been seen and accomplished in Jesus Christ. He shared everything he was taught, everything he experienced, everything he had seen accomplished since his conversion on the road to Damascus. And, in the end, we're told that some were convinced and others were not. Still, for Paul, if a single life embraced the truth and hope of Jesus Christ, it was enough.

This is the last moment we witness in Paul’s ministry that isn’t recounted in one of his penned letters. While it finishes with a bit of a flourish, that Paul continued to preach about Christ with all boldness for the years after, it’s this proclamation that Paul makes to the religious leaders that I think is important for us to explore more deeply. As has been the case throughout our journey through the book of Acts, we find something here that can serve as an example and a conviction for us as we seek to follow Jesus in our own lives.

Paul had endured so much to get to this moment. This moment that he had been seeking for quite some time. The moment where he could finally get in front of this audience and hear them say, “State Your Case.” And Paul jumped at the opportunity. Paul had a singular focus; a driving goal and it was simple - share the Good News of Jesus with anyone and everyone he could encounter. From the moment we first encounter Paul to these final verses, Paul’s mission has gone from eradicating the spread of Christ’s teaching to working to see it touch every heart and story. Specifically, he wanted these Jewish leaders to see and know and be changed by the truth found only in Jesus Christ and His cross. And He wanted them to know that the message was spreading.

How many of you can recall an experience like this one, where you were with someone or a group of people and you took that opportunity to tell them about the life and love and truth of Christ? Evangelism, or the act of sharing our faith with another, can be somewhat of a lost practice these days. We fear offending someone more than we defend the Savior who rescued us. We worry we won’t know what to say or that people won’t listen, or worse, that they’ll be upset with us or disagree with us.

But, friends, there is so much at stake here. And let me tell you something, people are already watching you. This is a lesson I have learned from eight years in student ministry and now six years being a parent: You are always being watched. Whether it’s the way you treat people, the words you use in private, what you post on social media…we don’t need people to come to us and say, “State Your Case.” Every day, every interaction with another person is our opportunity to do what Paul did at the end of Acts.

So, I ask you this: What kind of a case are you making? In a time like this where opinions are more abundant than ever, what truth are you offering? What words of hope? What acts of justice? What displays of compassion? Maybe another way to frame the question: What are people hearing you say? At home? On social media? On the golf course? At school or in the office, whether that’s in person or virtual? What kind of case are you making to your kids? To your neighbors?

Let me get very specific: What is your life telling others about Jesus? Paul had a burning desire to see people come to know how much they are loved by the Son of God. He shared it with soldiers, priests, politicians, and strangers. And because Paul stated his case for Christ, the world was changed. We each have that opportunity…to be a part of God’s work in changing this world. But, in order to do so, we have to make the most of every instance where the world looks at us and says, State Your Case. 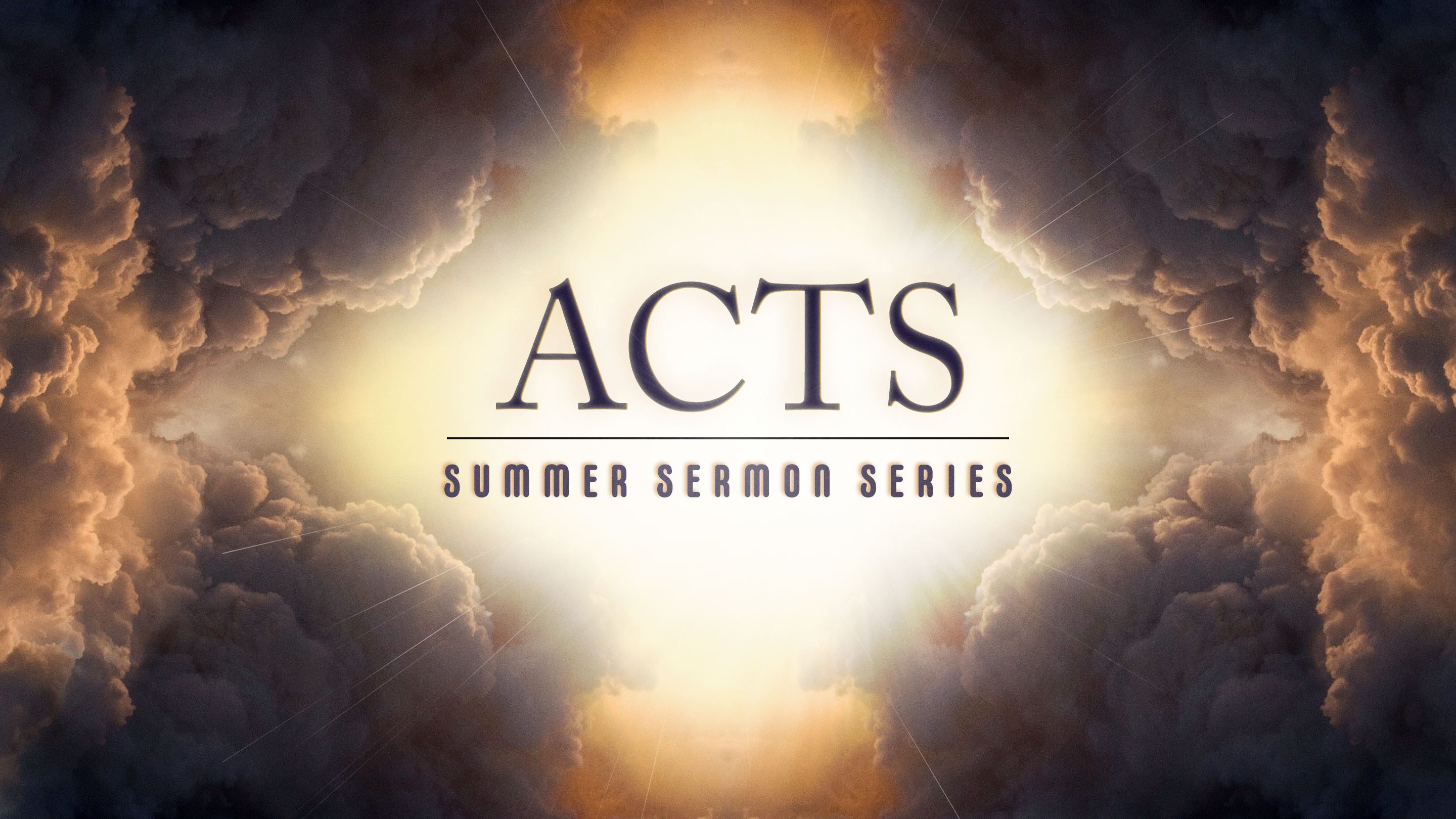