In Common: Grading On A Curve

What is the hardest class you've ever taken in school? We all had a subject or class at some point that gave us some trouble, right? You might recall how I've previously shared about my fruitless battle against the dreaded geometry. But as hard as geometry was for me, it was not the hardest class I ever had. No, that honor goes to my first class of Hebrew. Some of you know me well enough to know that I love: learning, academics, reading, research, and writing papers. As long as it's not math, I'm happy as a clam in a classroom or lecture hall except with Hebrew. I didn't go in with a bad attitude either! I was excited. I was going to learn the ancient language the Jewish Scriptures were written in. Not only that, it's a language you read backward, right to left. I was pumped. Until the enormous weight and burden of Hebrew brought me to a screeching halt.

I struggled - a lot. From the alphabet to sentence structure, none of it came easy to me. And apparently, I wasn't the only one having trouble. My friends in the class commiserated with me daily, but it seemed almost everyone was having problems wrapping their heads around Hebrew. That reality led our professor to inform us that she was going to be doing something that I had never heard of before. She said for the next exam; she would be Grading on a Curve. She went on to explain that this meant all of our exams moving forward, would be in her words, "having the floor raised up a bit." Those of us that had been in the pits of low C or D grades would notice a slight bump up. I know that not every educator agrees with the practice of Grading on a Curve but, for my struggling classmates and me, it was a gift that gave us hope we might be able to pass the class.

This morning we are wrapping up our short two-week series called In Common. The focus of these two messages is to help remind and recalibrate each of us so that we can remember all the things we have In Common with each other and everyone else. Last week we looked at the first chapter in the Bible, Genesis 1, and explored the Striking Resemblance we all have with the One who made us. Fashioned in God's image and filled with the very breath of our Creator, each and every human being possesses a unique and breathtaking identity as a child of God. This morning we will be looking at something else we have In Common, but I have to warn you. This commonality of our race isn't something we want to be reminded of. In fact, more often than not, we try to ignore or deny it. It can be defined or noticed in several ways. We can call it brokenness, evil, wrong, transgression, crime. It's been referred to as falling short or missing the mark. People who have worshipped and sought out God have generally referred to it with a simple but saturated 3-letter word, sin. And whether we like it not, whether we're willing to admit it or not, it's something we all have In Common. And to see where it began, we come back to Genesis, but this time we are in chapter 3. It's a story you might have heard before. We're in Genesis 3, and I'm going to read verses 1-24.

Now, before we go on, I want to call a spade a spade and get something out in the open. I am fully aware that sin is not an uplifting, fun, or warm and fuzzy subject - quite the opposite. It's everything wrong with humanity and this world. But as people who want to follow Jesus, sin is not something we can afford to ignore or pretend is insignificant. Christ spent a majority of his ministry on earth calling out, combatting, and redeeming the brokenness and evil that he encountered. Even more, he went to a cross, not merely to provide an example of self-sacrifice or to make some kind of statement to his political or religious rivals. Jesus went to the cross to break the power and the hold that sin had over the human race. Sin - as our text reminds us, has been a burden and a cancer on the entirety of humanity from the very beginning.

The sly serpent sows just enough temptation and doubts within Eve's mind to bring her to the point of no return. Now, I want to clear something up here before we move on. Any conception that this was all Eve's fault and that she's the only guilty party in this is way off base. Adam was there. We're told that Eve ate the fruit and then gave some to Adam. So, Adam witnessed everything that Eve did. And he let her pull that fruit from the tree and take a bite. Eve's sin was one of commission. Adam's was one of omission. Both are guilty, and both face the consequences. The same consequences we are still enduring to this day.

When Adam and Eve sinned, it's as if their very world fell apart. Now, aware of shame, regret, and fear, they do the same things that we all do when we are guilty. It's something I think we all have In Common. First, they hide. For the first time in their relationship with their Creator, human beings seek to hide from the One who loves them. To hide what they've done, their shame, their guilt. We do the same thing. As children, we might think putting a blanket over a broken lamp will hide our mistake from our parents. As we grow, we become more adept and craftier with how we hide our sin. We try to convince ourselves and others that whatever the vice is that it's not that bad, that it's only this once, that it is something we really wanted. Lying is called a little white lie; being drunk is called a few drinks with friends; verbal abuse is called just playing around; gossip is just a little talk between friends. We've become very good at masking the truth.

The next thing we do that mirrors Adam and Eve is the blame game. Adam says Eve made him do it. Eve says the serpent made her do it. There's no real remorse or repentance, just a game of guilty hot potato. We've all done this at some point. He made me do it. It's not my fault. We lose our temper, and we say that we aren't responsible for our actions. We do wrong by another and we rationalize that they had it coming. We forego our integrity or morals, and we say it's because it's just how the world works sometimes. And regardless of the situation, whether we're in a garden, at home, or in the privacy of our own mind, we try and shift the blame anywhere other than on ourselves.

I hope you can see one thing very clearly, this problem of sin, however we want to define it, is something all of us have In Common. The apostle Paul, as we heard this morning, lays it out clearly. Romans 3:23. We all have sinned, and we've all fallen short of what God intended for us. If it's helpful, we can frame it this way. In the exam of goodness, purity, justice, and holiness …we've all flunked. But, thankfully, the one who is scoring our exam is Grading on a Curve. The very next thing Paul says after hitting us square between the eyes with the encompassing and crushing weight of the reality of sin - is this: but through the work of Jesus Christ, we can all be made right through the grace of God that is given freely. This is the Gospel. It's the Good News, and it's likely the greatest and most important thing we also all have In Common. Because it means this:  the one who is scoring the exam, that is our life, is now Grading on a Curve, and it's the curve of grace.

The power and the reach of Christ's work on the cross and the indescribable grace of God is something central to who we are as the children of God. Like an orbit, it's a reality we will come closer and closer to as we approach Easter. But this reality should do more to us than give us a sigh of relief. It should change the way we interact with everyone we encounter. When a teacher grades on a curve, it seems almost too good to be true, almost unfair because the curve applies to the entire class. God's grace works much the same way, except instead of a class; it is the whole human race. And if it is grace we are given - in such unbelievable measure, then it is that same grace that we should give to others.

Adam and Eve's mistake in the garden set inexplicably terrible things into motion in this world. Things that we are all both the victim of and the perpetrators of. We have all felt the stinging and crushing effects of sin in our stories, and whether we want to admit it freely or not, we've also all been the ones exerting those same effects upon others. None of us are perfect. We've all messed up. If we truly want to live into that Striking Resemblance to God that we talked about last week, then we need to change the way we treat other people. We all need to be Grading on a Curve.

Our culture loves the "gotcha!" moments where we get to expose or embarrass another person. It might be a moment of humiliation, a chance for us to undercut someone's credibility or even a blatant attack on another's character. The political theater saturating our newsfeeds shows us this behavior excessively and will continue to as we approach November 3rd. But it happens virtually everywhere. Social media makes it far too easy to judge and tear down others. We do it when we're frustrated, jealous, scared, and sometimes when we're doing just fine. We might think something about the way someone dresses or question their parenting skills or speculate on another person's intentions or morals. The end result is always the same: we take that which we believe is wrong with someone else, and we quickly write them off. If we were grading the exam on that person, we'd slap them with an F without a second thought.

But that's not what God did with us. It's not even what God did with Adam and Eve. Our Creator took the life of an innocent animal and covered the mistake and shame of the first couple with that animal's skin. Centuries ago, our God covered our own mistakes and shame with the blood of Christ. For some reason, grace was given when it shouldn't have been, and because of that, we have a chance at lasting, full life. We need to pay that forward. Do unto others and all that. In other words, we should be Grading on a Curve. 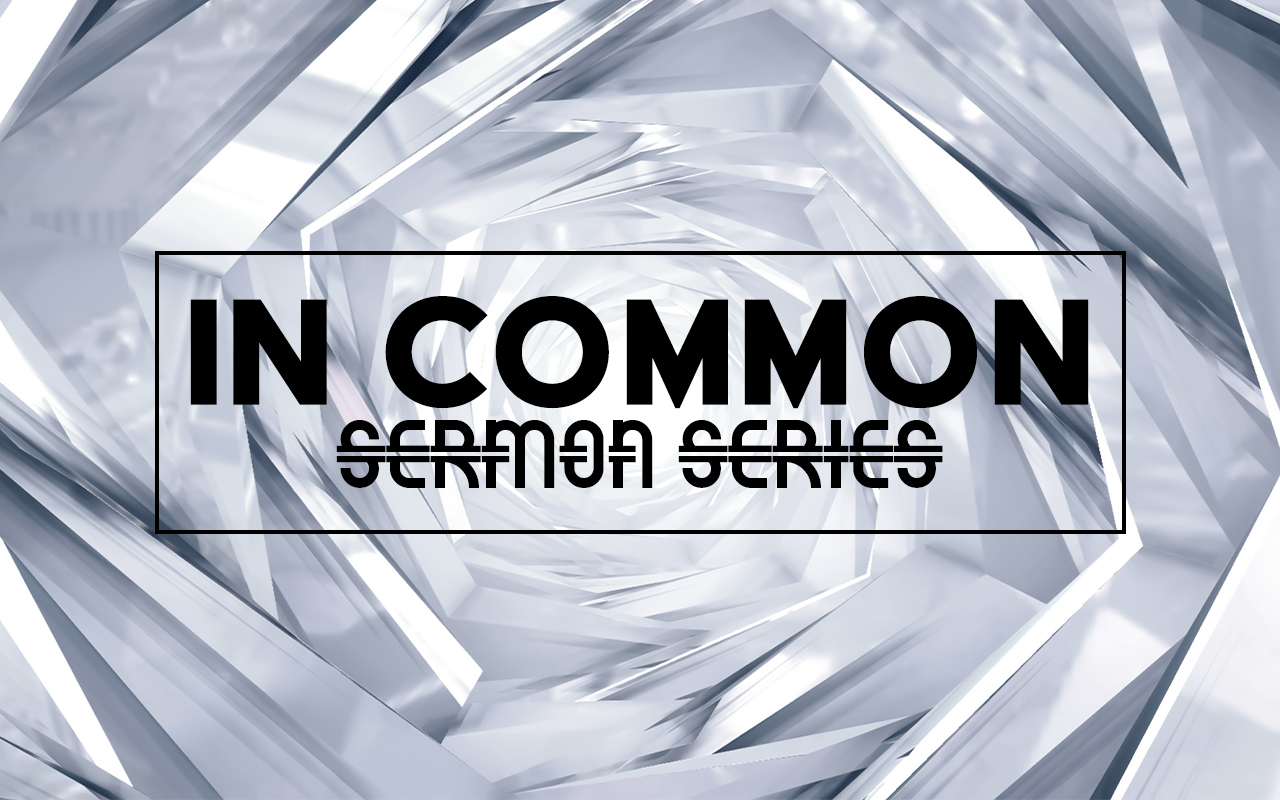 More in In Common