How many of you are familiar with the term “Best Laid Plans”? It’s a saying that originally comes from a poem written by Robert Burns in 1786. The original verse was: “The best laid plans of mice and men often go awry.” It essentially describes a situation where we make all of our plans and things find a way to go wrong or something unexpected happens. This isn’t one of those situations where you go in blind or try to wing it and hope for the best. No, there was research and thought. Still, something went wrong. There are a couple of examples of this I can think of. In 1997, during the Thanksgiving Day Parade in New York City, onlookers and children everywhere got a terrifying surprise they weren’t expecting. The parade planners had done all they could. They plotted the route, they had their volunteers, and they thought they were ready. But what they couldn’t account for was the wind. Enter everyone’s favorite purple dinosaur, Barney. The Barney balloon float was making its way down the street when it got caught by some of the strong winds. Everyone present and tuned in on TV could only watch in horror as that huge-loving purple dino collided with a light pole and popped before their very eyes. Best Laid Plans.

There’s another, more recent, example that maybe many of you witnessed. Two years ago the Oscar’s filled the attention and screens of many. When it came time for the presentation of the prestigious “Best Picture” award there were cast and crew and fans of several productions waiting anxiously for the announcement of who would take home the award. Warren Beatty and Faye Dunaway opened the envelope at the mic and you can see some visible confusion from Warren Beatty before he finally hands it over to Faye Dunaway, and well, many of you know what happened. The wrong movie was announced as the winner at the Oscar’s! The entire cast and crew of La La Land goes up on stage, people are giving speeches, and then it’s announced that, no, La La Land did not win. Moonlight had actually won. This was the 89th Oscar’s. There was a pretty well-thought-out plan in place and not much could derail it. Again, Best Laid Plans.

We’ve all experienced moments like this, right? Maybe not missing out on an Oscar or witnessing the explosion of a dinosaur, but we’ve probably had some example of Best Laid Plans in our own stories. A home improvement project went awry. A family vacation that took an unexpected turn. All of these experiences teach us that sometimes our plans don’t work out the way we anticipated. This happens in the workforce, in education, in relationships, and even when it comes to finances.

This week we’re continuing our message series based around Adam Hamilton’s book, Enough, with a focus on looking at the reality of finances through the eyes of our faith. Last week, we explored how our love for and desire to be like Jesus can help reveal the American Dream for what it really is…a bait and switch.

This morning, I want us to explore the concept of planning around our finances, and really, our lives; and I want us to do so again, using our belief in Jesus and our faith as the primary platform for that examination. To start that, I want us to look at one of the stories Jesus told about two builders. We’re in Matthew 7:24-29. This story that Jesus shares with His audience is one that has so many implications. We could apply to virtually any aspect of our lives. The concept is pretty straight-forward: Know your foundation. What are you building your life upon? What matters the most to you? And in this story, we encounter two people with the same goal but two different plans for achieving that goal. Both builders want to construct their home, the place where they will live, rest and grow. One builds on solid ground, the other builds on sand. We are told what happens. The plan mattered and the builder who built on sand found themselves the victim of Best Laid Plans.

When it comes to exploring finances with the eyes of our faith, this parable can be quite helpful. You see, I think all of us have a goal in mind when it comes to the resources we have. Specifically, with our money, that plan might include something enjoyable we’re saving for, a project we want to undertake, or maybe a new venture or even retirement. It doesn’t matter how many numbers appear in your bank account, we all have a goal. It’s something we are striving toward. Our plan for reaching that goal, that’s a whole different thing altogether.

But I think one of the ways in which we miss a crucial lesson out of Christ’s story is by being too simplistic with its implications. It is easy to dismiss the architect who built on sand as foolish - but why he is foolish is critical. If someone is gifted with the ability to be able to build a house, they know a thing or two about construction and architecture. That means they understand the value of the foundation. So why would an architect construct a house on an uncertain foundation? Perhaps the draw of the nearby waters? Maybe it was its proximity to another landmark or city? The builder undertook to work on creating a home on the sand for a reason. He had a plan. It just went wrong, and honestly, was doomed to fail from the beginning.

When it comes to the way we approach or understand finances, we have to realize we can fall into the same trap, the same Best Laid Plans, as the foolish builder. We can place our emphasis and the execution of our goals in the wrong place and end up building on the wrong foundation. Sometimes this is out of ignorance. But sometimes it’s not that simple. Sometimes we build on the wrong foundation with our finances because we believe a lie our culture proliferates and that is - that we deserve to consume as much as we can. In wealth, possessions, enjoyment, security, etc. We exist in a culture that celebrates consumption and often times even applauds and romanticizes those who can consume the most. The biggest house, the most expensive car, the latest fashions, the best seats, the most prestigious schools, the corner office, the latest tech. The list goes on. And if we fall under the hypnotic mantra of our culture that compels us to simply see ourselves as consumers, we become like the foolish builder. We cast aside reason and logic, and even tenets of our faith in order to consume, in order to build where we want.

But what if we listened to a different voice? What if we no longer tuned into the ravenous consumerism of our culture and instead sought out the still, small voice of God when it came to how we use the financial resources we have available to us? It can truly be the difference between building on solid ground or building on sand.

So let’s say for a moment that we are ready to explore what it would look like to try and step away from this heightened sense of consumerism we’ve described? What kind of steps can we take to change the way we live and the way we use the resources God has provided us with? There are literally dozens upon dozens of voices that want to tell us the best way to manage our finances. I am not one of those voices. I’m not a financial advisor and I don’t want to pretend to be. All I want to do is draw your attention to the insert in your bulletin. This is a resource we want to provide you with. It comes directly out of Adam Hamilton’s book and was fostered not only with the desire to identify sound financial principles, but also to lean into the biblical reasoning behind how we use what we are given. Again, looking at finance with the eyes of our faith.

On one side you’ll find “Six Key Financial Principles” that can serve as the starting block and the pathway for examining where our plans can be rearranged so that we are building on top of solid ground. The Best Laid Plans of our culture tell us to go for what we want, hoard as much as we can, and hope we have enough in the end. That’s the definition of building on sand and flirting with disaster. These principles provide some insights that might seem obvious, they might seem simple. But can you examine them and honestly say they won’t work? The flip side of the handout is an opportunity more than anything else. I find that when I write something down, it creates permanence and a conviction that would otherwise be missing. So this week look at those questions and write out your answers. You might be surprised by what you come up with.

We have all fallen victim to Best Laid Plans at some point in our lives. Sometimes it’s not something monumentally significant. We get caught in traffic and end up being late for a commitment. We forget something at the grocery store. Small things that we can get past quickly. But those aren’t the types of consequences we see displayed in Jesus’ story about the two builders. In truth, Christ’s story provides a helpful framework for a conversation about finances but the power of this parable is more demonstrably relevant to our lives as a whole. What are we building our lives on? Where are we placing our assurance and our certainty?

We can make all the right financial decisions in the world, and the truth is, we can still end up impoverished. We can have all the material things we desire and still feel like we have nothing. Friends, don’t miss this. The most important thing I want you to know this morning is that a life built upon, with, and seeking Jesus Christ - is a better life than anything else we can fashion or muster. There is no other relationship, reality, achievement, goal, or dream that can even come close to the solid ground that is the Rock of our Salvation. If we chase after affection, recognition, wealth, happiness, comfort…we’ll always find ourselves wanting and we’ll never stop feeling that terrifying uneasiness of the sand we’ve built our lives on. Jesus Christ though? He is a foundation that is sure, a friend that is faithful, a relationship and commitment that will never leave as the victim of Best Laid Plans. 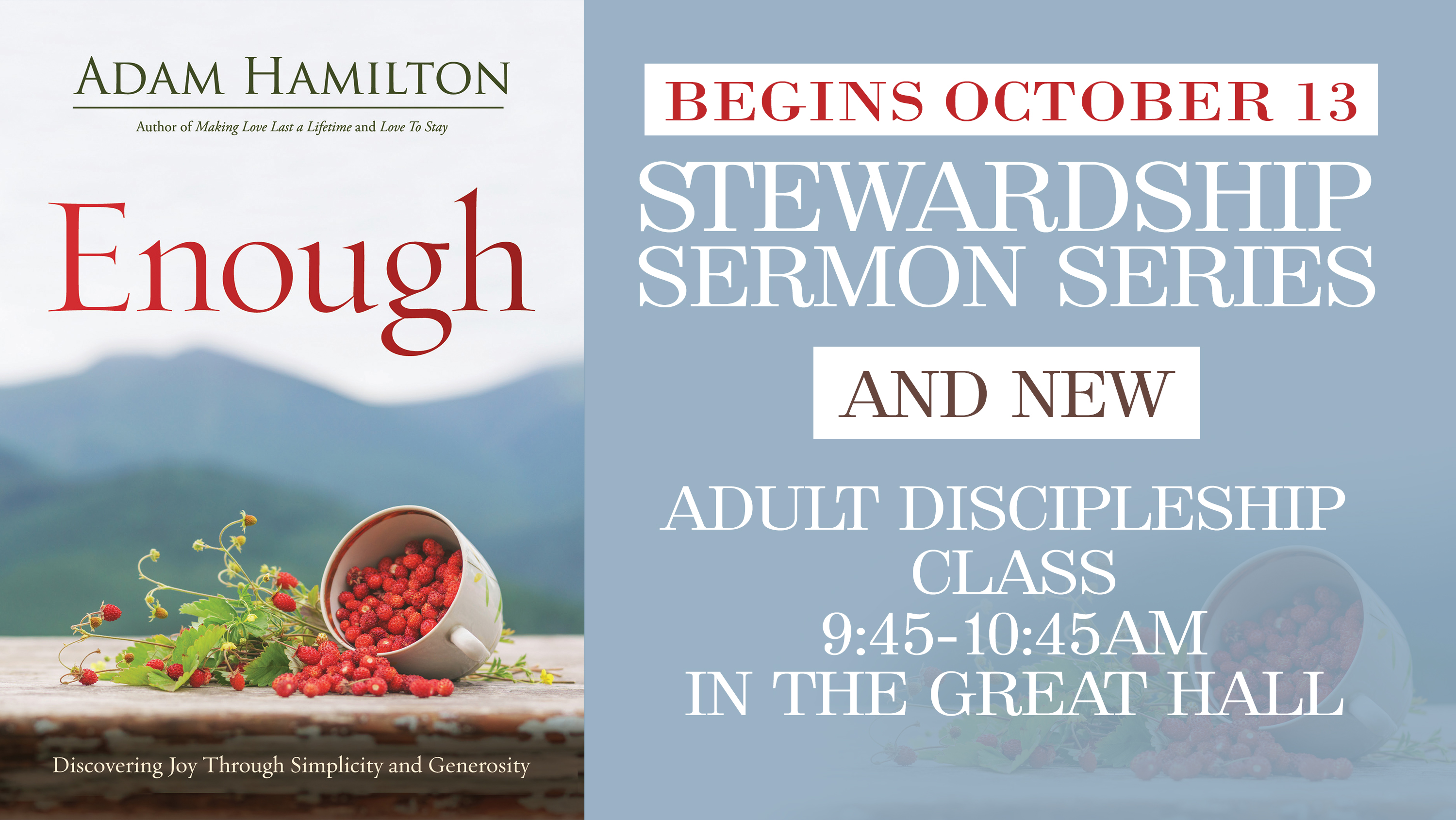 10am In-Person Worship
10am Live-Stream Service