About two weeks ago, I began a journey that many of you have endured. A necessary journey but one that has perhaps one of the most difficult beginnings that I can think of. Caitlin and I sent our oldest off to kindergarten. I am not generally a worrier. I’m a pretty blatant optimist, obnoxiously so. I see the glass half full and with a free refill on the way. But, for the life of me, I could not stop worrying about Isaac in Kindergarten. And it wasn’t even the whole experience of school that I thought about. I didn’t think about the classwork or recess or even making new friends. All I could think about was who was going to help him eat his lunch? I know I’m crazy, but I also know that most of you were just as crazy as me when you went through that big change.

But the day finally came where I was going to start our new rhythm with me dropping Isaac off at school before heading into work. So, we pulled up, we got out of the car and walked into the school. We get to the door and I give him a hug and kiss and nudge him on his way…some of you already know where this is going…and Isaac begins to break down into tears. He wants me to walk him into his class and doesn’t want to go alone. The problem is, the excellent staff at his school don’t want parents walking their kids in. I get it. Clear boundaries and all that. So, I’m trying to tell him I can’t go in. The teachers and staff around are trying to encourage him. And he’s just in tears and crying for me. But he has to go. There isn’t a choice. Not for him and not for me. It was the start of a new chapter and the ending of an old one. Everything was changing and both of us could only move Fearfully Forward.

Fear is a part of the human experience. And like most aspects of this world, it has the potential to be destructive but also has the potential to spark renewal, growth, and redemptive change. We have witnessed an overwhelming number of accounts displaying how fear can be wielded as a weapon and as an instrument for oppression, prejudice, and violence. But not all fear is of that same quality or depravity. Some fear is a simple response to our own uncertainty or our apprehension to go where we have not gone before.

The fear someone feels standing at the edge of a diving board for the first time is quite different in nature and quality than the fear felt by a teacher or student who hears the warning of an active shooter. The fear a high school student feels when they ask someone out on a date is not the same as the fear someone feels when they see a wild animal charging at them. My point is this: Fear is not always a bad thing. And if we can begin to accept that reality, then we can start to understand how the women in our text for this morning felt.

We’re finishing our walk through the Gospel of Mark this morning. All summer we’ve spent time in this account of the life of Jesus, including last week when we stood at the somber place of his death. This morning, though, we come to a chapter of celebration and joy…and also fear. We’re in Mark 16:1-8.

We’ve heard this story, or a version of it, every Easter Sunday that we’ve come to church. It is the pinnacle and precious gem of our faith. On it, everything else rests. The resurrection of Jesus Christ. It’s an exciting, joyous moment. Isn’t it? Maybe you’ve figured out why Mark’s account of the resurrection is the one typically preached the least on Easter Sunday. The news is there. He is risen! The tomb is empty. But you can see something’s missing, right? Where’s the joy? Where’s the celebration? Where’s Jesus?!

As you can see, Mark’s Gospel gives us a different perspective of this miraculous account than we might be used to. The three women come to the tomb of Christ prepared to anoint the lifeless body of their friend and teacher. When they arrive, they see that the stone sealing the grave has been rolled to the side. It occurred to me, how terrifying that must have been. I mean, did they think someone stole the body? Vandalized the grave? We read that they actually began walking into the tomb. Regardless of what they might find, their devotion to Jesus urged them to ensure his resting place was not disturbed. And then they encounter the angel. And the angel gives them the news you would think would fill them with joy. “Don’t be afraid. Jesus isn’t here. He has risen from the dead. Go and tell the other followers of Jesus.” The angel even tells them where to go to find Jesus. “Go to Galilee and you will see him.” But what happens?

Mary, Mary, and Salome are filled with fear and confusion. They go from the tomb and the last thing we hear is that they didn’t tell anyone because they were afraid. The other gospel accounts reveal to us that this isn’t the end of the story though. Matthew’s gospel tells us a similar story and that the women were afraid and went from the tomb but adds that there was also joy and that, eventually, they met Jesus on their way to the disciples. Luke tells us the women were filled with fright and, just like Matthew, that they eventually shared the news with the disciples. John gives us the largest variation to the account but still tells us that the disciples heard the news from one of the women. What are we supposed to make of Mark’s telling? Did Mark miss something? Did he get it wrong? No, I don’t think so. I think Mark was intentional with the ending of this account.

You might remember that when we began this series through Mark’s gospel, I described it as an action-oriented story. Much like a comic book. I would also describe it as the most human of the tellings of Jesus’ life. Mark is seemingly not interested in providing a tidy, complete story, but instead, opts for a story that requires our own participation. One commentator describes it this way: “Mark’s ending is no end; only the reader can bring closure. In one sense this unfinished story puts the ball in the reader’s court. It puts us to work; we must decide how the story should come out.”

We are the women of this text in Mark. Each and every one of us. We have heard the Good News of Christ’s resurrection. Some of us have heard for years and others for decades. We have sung the songs, heard the sermons, sat in the classes, done the mission work, and all of that. We have been told that Jesus is alive, and likely from various people throughout our lives, we have been shown the way to meet Jesus even more personally. The trick, the necessary next step, is moving in that direction. Even if it means doing so by going Fearfully Forward.

I told you all about my experience with Isaac and dropping him off at kindergarten. What I didn’t tell you is how hard it was for me to move on from the front of that school. Isaac had his own journey to take. He had to head into Fairview and begin his day and enjoy all that the Lord had in store for him. But I was paralyzed outside those doors. I could hear him crying, even yelling “Daddy” from inside. I didn’t know what to do. Another parent dropping of her child noticed me and told me that it was ok, that after 3 minutes he’d be fine and having the time of his life. And so, I started toward my car…I moved Fearfully Forward. I wasn’t settled. I was nervous. But I knew I had to go.

Our faith journeys are much the same. Much like the experience of the women standing before the angel in Mark 16. Even those who are the most lost know that they want to go home. It doesn’t matter where you are in your walk with God, I am willing to bet that you know there’s a place where you’re supposed to be. A place, just like Mary, Mary, and Salome, where you will become even closer to Christ. There’s uncertainty all around you. How will it affect you? Your time, your finances, your friendships, your priorities.

I can stand here and tell each and every one of you the Good News that Jesus has something for you. I can share testimonies and inspiring accounts of how other brothers and sisters of our faith were given tremendous opportunities due to God’s call and their own faithfulness to go. I can tell you what the price paid is for passing up the chance to grow deeper in your faith. I can quote Scripture, write sermon series’, teach Sunday school classes, and pray with you. But you know what? You have to decide how your story continues. That’s what Mark tells each of us. We have to decide what to do with the news of the Resurrection.

So what is next in your story? What will you do? I spent years crafting retreats and excursions for teenagers so that they might have a “mountain top experience” in their faith that put them on a new path for lasting change and discipleship. But you know what I learned? We have those moments of opportunity every day; we recall what Christ did for us on the cross and we remember the door He opened for us through His resurrection.

But just like the women at the end of Mark’s gospel, we have to decide what we do, where we go, who we become. Yes, it will be hard. Yes, it will require sacrifice and change. But every meaningful transformation requires that. A caterpillar has to sacrifice the ability to crawl in order to fly. I’m not saying it will be easy or quick. But we all have a choice. And it is my prayer that you would make the decision to go toward Christ, even if it means doing so by going Fearfully Forward. 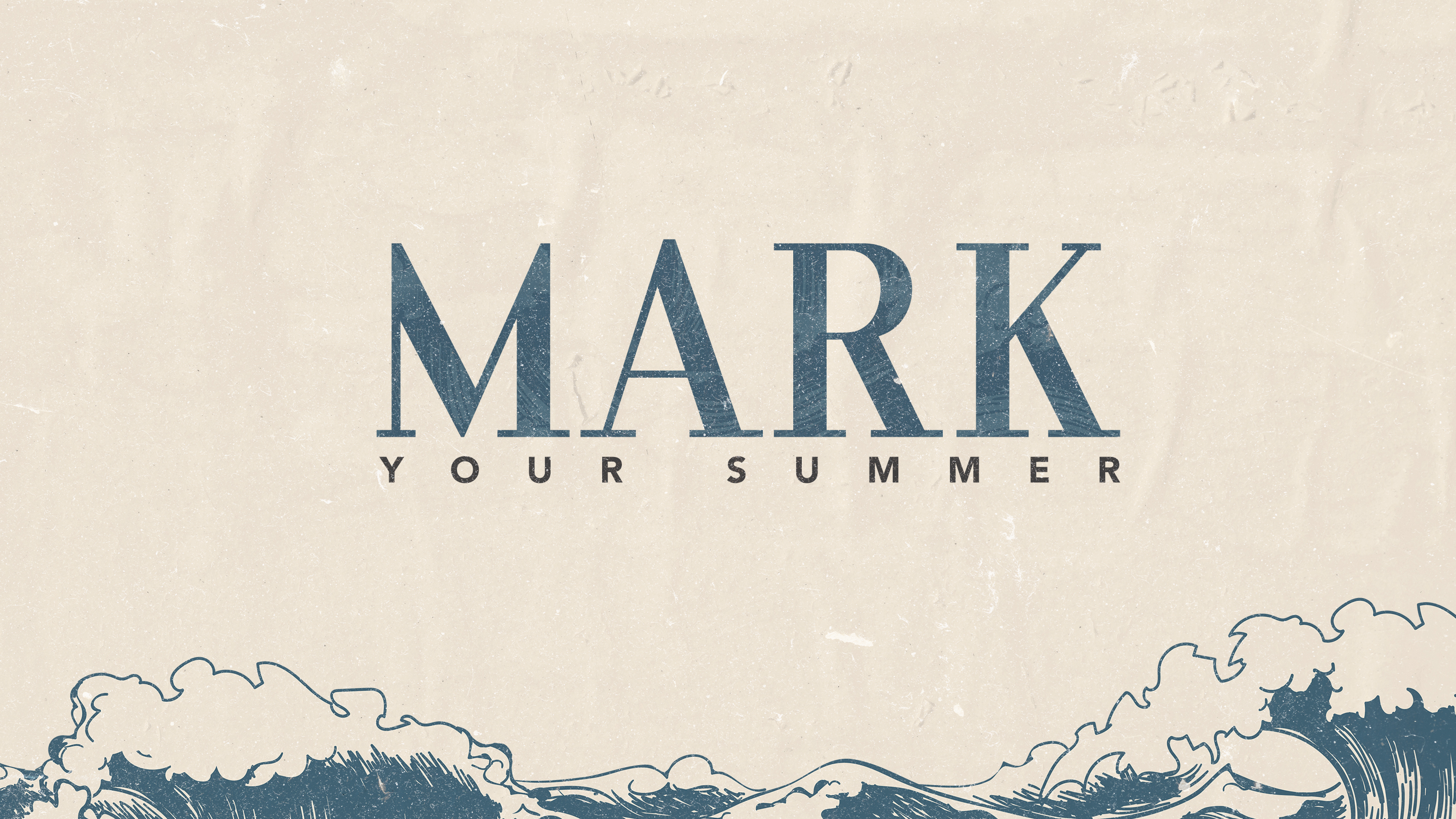 More in Mark Your Summer

The Weight of Darkness

Being One - Pastor Chip Roland