It Will Never End

Tall Tales: It Will Never End

For as long as humanity has gathered together, there have been stories told. Ancient cave paintings, elaborate hieroglyphics adorning temples and pyramids, scrolls and parchments filled edge to edge with retellings and imaginations. Spanning location, culture, and time period, we have collected and shared stories and memories with each other. When I was a kid, I was enamored with Greek mythology. The stories of fantastic creatures, unbelievable heroes, and the gods of Olympus held my attention like no other book or subject could. I found myself lost alongside Theseus in the labyrinth, shielding my eyes from the sun behind Icarus, and cheering at the feats of strength Hercules performed. I loved those stories but I also always knew they weren’t real. Even as a kid, I knew the difference between a myth and real history. But I had trouble differentiating whether a Tall Tale was true or not.

I remember reading stories of a lumberjack and his giant blue ox and a man who beat a machine in a railroad building contest. The problem was that the stories resembled enough of what I knew to be true that I had trouble differentiating whether these tall tales were true or not. Greek myths were easy. I never saw three-headed dogs or satyrs running around and I knew that there was only one God, not many sitting on top of a mountain. But these tall tales were set in parts of the country I had heard of and talked about things I saw every day. These Tall Tales were just familiar enough to seem true and that was part of my problem.

This morning we are starting a new message series called just that: Tall Tales. As we lead up to Easter, we will be exploring some biblical stories that I’ll call our Sunday school favorites. Noah’s ark, Jonah, David and Goliath, Daniel and the Lion’s Den, and others. To make sure there is no confusion, I am not saying that these stories are Tall Tales. These accounts from the inspired Word of God give us a glimpse at God’s relationship with humanity and I understand and believe them to be true and I hope you do as well. These biblical events aren’t the Tall Tales but I do believe they can help us reveal other Tall Tales that we’ve convinced ourselves are actually true. Certain exaggerations, even downright lies, that, for whatever reason, we have allowed into our hearts and minds and that God wants us to be freed from.

And so this morning we will start by exploring what has to be the single most popular biblical theme for nurseries all around the world. Everyone’s favorite account of the first floating zoo…Noah’s Ark. The story of Noah is a massive one, spanning several lengthy chapters of the book of Genesis. The general details of the story are fairly common.

We’re told that the human race as a whole has become so wicked that it has broken God’s heart to the point where our Creator comes to the painful and troubling decision to press the restart button on humanity. A world-encompassing flood will wipe the slate clean, so to speak, and the human race will begin anew. The one tasked by God to foster this reboot is a man named Noah, who, we’re told, is the only righteous one left. At the Lord’s command, Noah builds a giant boat, gathers his family, and fills the ark with animals of every variety and species in anticipation for the coming catastrophe. And that is where our text picks up. We’re in Genesis 7:11-24.

Truth be told, almost the entire account of Noah’s story is dreary. It’s painted in pastels and given a kid-friendly makeover, but in reality, this beloved Bible story is a truly troubling and difficult reality to try and process. But this portion of the story that we’ve heard is the most depressing and anxious chapter. Again, I want to be clear, my intention with this series is not to say that these biblical events are Tall Tales. Instead, I believe these accounts, even one as heavy as this, give us a glimpse at something false that we have convinced ourselves is true.

Back to Noah. This part of the story in Genesis 7 takes us into what must have been the most anxious, scary, heart-breaking days of Noah’s life. The rains have come. He and his family are forced into an unfamiliar space and told simply to endure. For forty days, the rains pounded the ark and the world. Soon all dry land and place of escape disappeared as the rising waters consumed everything they once knew. Creatures perished. People died. The skies were dark and there was no break in the storm to be seen.

When we see coloring pages or pictures of this scene, there’s normally a smile on Noah’s face. But I think the reality couldn’t be further from the truth. Can you imagine what it must have been like for Noah and his family during those stormy, harrowing days? The crashes of thunder, the constant pouring of the rain, the rocking of the ship, the sound and smell of the animals. We’re fooling ourselves if we think those weren’t the worst days in Noah’s life. And it takes very little to imagine what Noah and his family were likely feeling days and weeks into the storm. Who could blame them for feeling like It Will Never End?

Noah wasn’t the only person within Scripture to feel that sickening, claustrophobic feeling that the difficult or painful circumstances we are going through will never end. Our gospel reading brings us beside a woman who suffered from a bleeding disorder for more than a decade. She would have been ignored and even actively pushed out of normal society. She was alone, sick, and out of resources…really, out of hope. Every day she wrestled with her pain and loneliness and likely felt that It Will Never End. Until Jesus came into her story.

Tall Tales are stories that are exaggerated just enough that they become untrue or even dangerous but just believable enough that we entertain them as reality. And in their worst forms, they become lies that ensnare and suffocate us. Noah and the woman from our Gospel reading likely suffered from being trapped within the same lie: It Will Never End. Noah watched the rains pour down and wash away everything he ever knew. Would the storm ever end? The woman with the bleeding disorder watched every relationship in her life whither and crumble along with all her resources only to leave her just as lonely and sick as she had been year after year. Would her suffering ever end?

And we tell ourselves this very same tall tale, the same lie. That It Will Never End. Our own storms come and we become battered by the winds and drenched by the rains. We see dry land and assurance disappears before us and our hearts become filled with fear and dread. There are times when we have struggled for so long that we begin to believe that there is no life without that terrible but familiar ache of despair. It can take so many shapes. It could be the loss of a job, a loved one, or a relationship. It could be a dramatic change we weren’t ready for. It could be something within, like a voice that only ever whispers defeat and discouragement. It could be medical or financial or emotional. And it can be spiritual. Sometimes the most painful and heart-wrenching storms we endure are not the loud squalls filled with booming thunder and howling winds. Sometimes it is the clawing loneliness and deafening silence all around us that leave us filled with sorrow and fear and feeling like It Will Never End.

But that, my friends, is a lie. It is a tall tale and one that our God wants dispelled and defeated. I can’t pretend to comprehend what it is right now you may be enduring or what you might be watching a loved one endure. I have had my own storms and periods of despair, times in my life where, not only was I suffering, but where it felt like there was no end in sight and no hope I could look to. Moments where my faith not only wavered but threatened to shatter altogether. And in those seasons, the enemy whispered the same lie to me that he likely whispered to Noah and to the woman in Luke’s gospel and maybe to each of you. And that lie is this: It Will Never End. It’s a tall tale that crawls its way into how we see everything. It is an exaggeration and it’s not true, but it seems just true enough that we are fooled into further despair.

But the storms did pass. Noah and his family saw the sun break through the sky and they eventually set foot on dry land once again. The woman who had known nothing except her disease for more than a decade was healed by the power of Jesus. I look back now on those painful seasons of uncertainty and fear from my own life and I can see how the Lord brought me out of them and here to this moment. Maybe you can reflect on your own story and how you saw God bring you or a loved one out of a season you thought would never end.

I want you to hear this, friends: You are only ever a moment away from God changing your story. Often times, it is impossible to know when the turning point will come, whatever it may look like. But our Creator doesn’t want us to live in the suffocating grip of hopelessness. It doesn’t matter if it is 12 years of disease, 40 stormy days, or 3 days in a tomb. Our God is a God of victory and redemption. Our God is a God of truth and hope. Any of the voices that compel us to believe that all there is for us is darkness and sorrow are working against everything our God has created us to be. That’s why we need each other. Sometimes God uses the voice of someone who loves us to block out the voice of despair we often allow to echo off the walls of our mind.

This Lent we are going to look at some of the most beloved, fantastic stories from within the pages of Scripture. Stories like Noah. And we are going to discover how each of these accounts not only has the power to fill us with wonder but also can free us from some of the lies we have been trapped under and the Tall Tales we have, for whatever reason, convinced ourselves are truths rather than exaggerated fables. Noah needed to be freed from one of those lies. It is a lie we sometimes tell ourselves, and God wants it wiped from our hearts. It is the lie that It Will Never End. 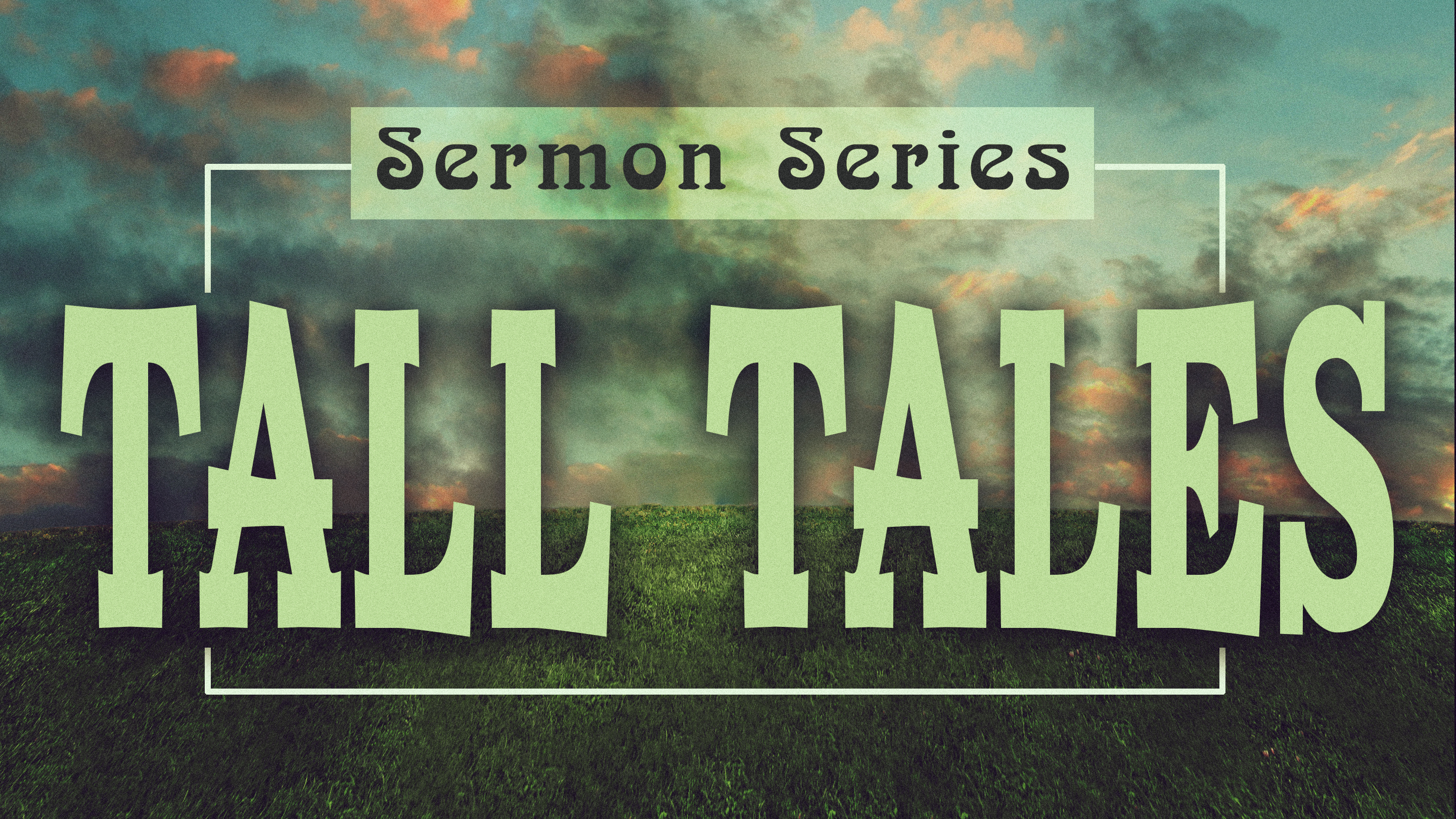 Tall Tales: I’ll Do It My Way

Tall Tales: A Whale of a Story