As we approach the conclusion of this sesquicentennial year for First Presbyterian Church, I want to thank our wonderful 150th committee for their fine work, events, specials, and research. Also, from days gone by, I would lift up a member who seemed to embody or incarnate the values of Jesus in her lifetime. Eunice Blackburn joined First Pres in 1901 at age 15 and was on the rolls until her death on December 24, 1981. Here is an excerpt from her biography:

Eunice’s graduate work was done at the University of Chicago. She taught geography at Illinois State Normal University before serving in Yucatan from 1920-1946, and again after her return. When she arrived in Yucatan, the Turner Hodge Colegio American School taught only 20 daughters of the upper class. This did not fit Eunice’s understanding of mission. By the time she left, there were 1,200 students, girls and boys, and 150 boarders from all economic classes. Because of her concern for the rural poor, the school is now called the “Eunice R. Blackburn Hostel.” There were two Presbyterian churches in Merida. She attended the church in the poorer section of town. Unlike the other missionaries, she had no maids. While she was back in Normal between 1946 and 1951, she cared for her mother, who died in ’51, and taught at ISU. In those days, students with children could not rent in Normal. A young couple with a child was asked the dreaded question by Eunice. They soon discovered that Eunice had decided to rent ONLY to students with children. Ruth and Lowell Kuntz were that couple, and they remember that kindness and social conscience fondly to this day. Eunice’s entire life was characterized by selfless service to others. She was a frugal-minded person who dressed simply and mended everything in need of repair. She was the resident tailor at her retirement home at Westminster Gardens in Duarte, CA. At 95, she turned down the offer to live in a more sheltered part of Westminster Gardens, because she would not be able to take her sewing machine with her. She died as she had live - caring for others. She had gone next door to feed the neighbor’s cat on Christmas Eve, when God convinced her to come home.

We give thanks for the life and witness of Eunice. She exemplifies the missionary, servant spirit of First Pres.

It might seem surprising that the early church had to strive to establish the concept that Jesus was fully human. I mean, who could doubt it? He was born to a woman named Mary. As she cared for the infant, mom - we can safely affirm - never questioned His humanity. Feeding time, sleep schedules, burping up milk, and whatever they did about diapers in those days - if anything: these were all very convincing. No doubt about it: this was a human baby.

Later, Mary would experience Jesus as an adolescent, and the tensions that can go along with that. She would have disagreements with him as an adult. At one point, His own family thought He was out of his mind. So human!

Yes, under the category “Good Intentions Gone Wrong,” some would seek to protect God’s reputation by denying that God’s Son could truly be one of us. If God is God, he is too holy, too mighty, to experience the ups and downs of life on earth, they reasoned. So they came up with formulas that absolved God of being human. He only appeared human, only seemed to get hungry, only looked like he had spiked a fever, with no Children’s Tylenol to help. And - he only seemed to die on the cross, but he didn’t really die. But scripture is insistent: as Hebrews declares, “Since the children share flesh and blood, he himself shares those things.” He really is the Lord, and he really is one of us.

Hebrews speaks of Jesus’ growth through suffering. He evolves. He increases continually in empathy and understanding. Then, in his ministry, he showed his sensitivity to the suffering of others. He didn’t glorify suffering, he tried to relieve it. One day he was teaching a crowd, far from town. He was aware of their hunger, their rumbling tummies. He said, “Let’s feed them.” Another time he went out of his way to minister to a man who was tortured by demons, or mental disturbance. By the end of the story, the man is in a state of peace and calm. Another time, Jesus found a woman who was about to be punished or killed for a crime she did or didn’t commit. He rescued her, restored her, and said to the men who had gathered for the stoning, “Whoever is without sin - you go first.” That story was so beloved by early Christians that it found its way into John’s gospel from another, unknown source.

So, this one who suffered for us was focused on alleviating the afflictions of others. He told followers, “This is your mission too.” Eunice Blackburn got that memo. Famously, in Matthew 25, the servants ask, “Lord, when did we see you suffer?” He answered, “I was hungry and you gave me food. I was thirsty and you gave me a drink. I was a stranger, I had nothing to wear, I was sick, in prison, and you reached out.” They might have pressed him on this. “That wasn’t you. Those were just some people who needed help.” Or, those who didn’t respond might have said, “That wasn’t you. Those were just some unfortunates we ignored.” Jesus would say, “No - that was me. You just didn’t recognize me when you saw me.”

He embraces his humanity so closely that he identifies with all, especially the desperate.

A good question to ask ourselves at the end of each day might be, “When did I see Him today?” And then a follow-on: “What did I do when I saw him?” 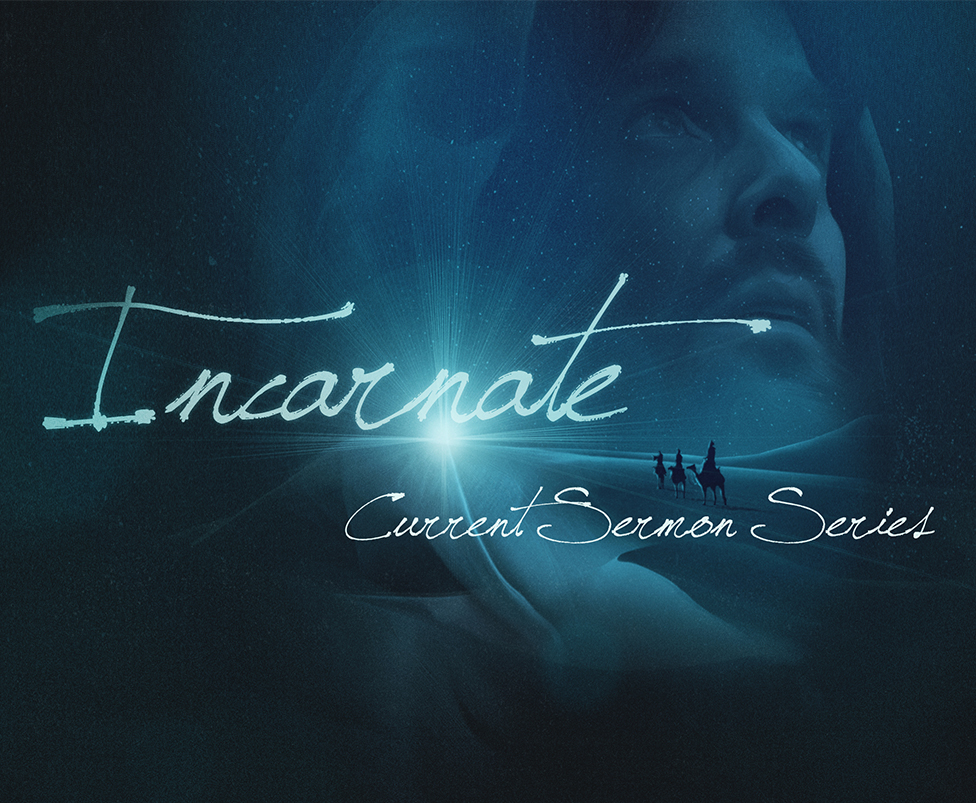 Incarnate: In, Over, All

Incarnate: The Beginning of Christmas