Taking Courage: The Ministry of Reconciliation 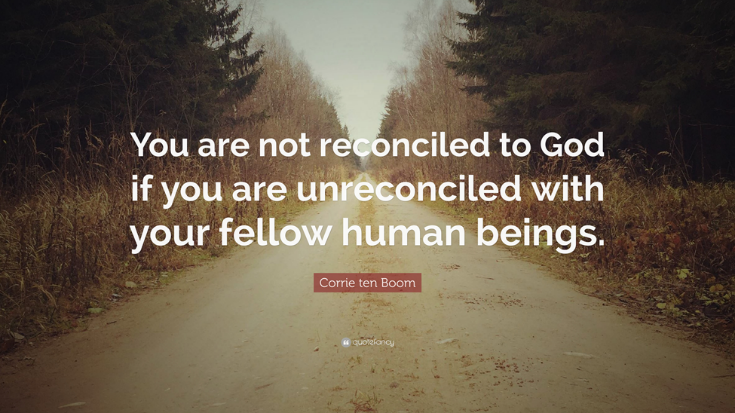 Corrie ten Boom experienced the horrors of war, including time in a concentration camp. Yet she sought forgiveness and reconciliation even with those who harmed her. She said, “You are not reconciled to God if you are unreconciled with your fellow human beings.” 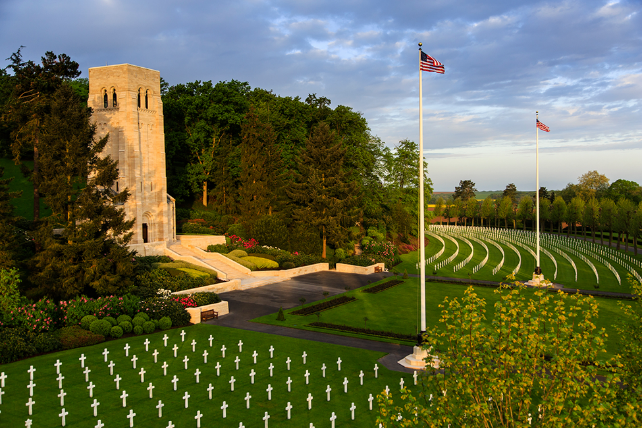 Today we remember the 100th anniversary of the final day of the First World War, Nov. 11, 1918. This is the beautiful American cemetery at Meuse Argonne. It was the site of a battle in France that lasted months. Meuse Argonne took more American lives than any battle in our history. Today we remember all those who have served since our nation’s founding. And we reflect on Christ’s call to peace, and what it means to be reconciled through the Cross and resurrection. 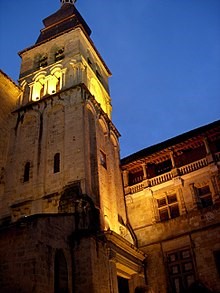 On my trip to France last month, I was struck by the monuments in towns large and small - to those who gave the last full measure of devotion. This is the cathedral in Sarlat, illuminated at twilight. Inside, a pillar with names of the fallen from that town, in what was called the Great War, 1914-1918. 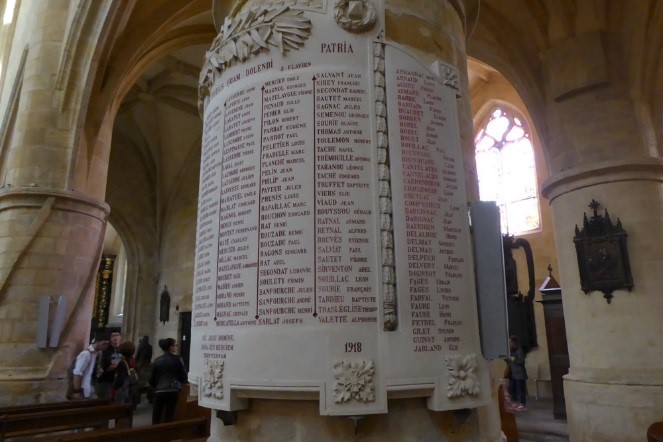 Another memorial, this one in a nearby park, is to the heroes and martyrs of the Second World War. 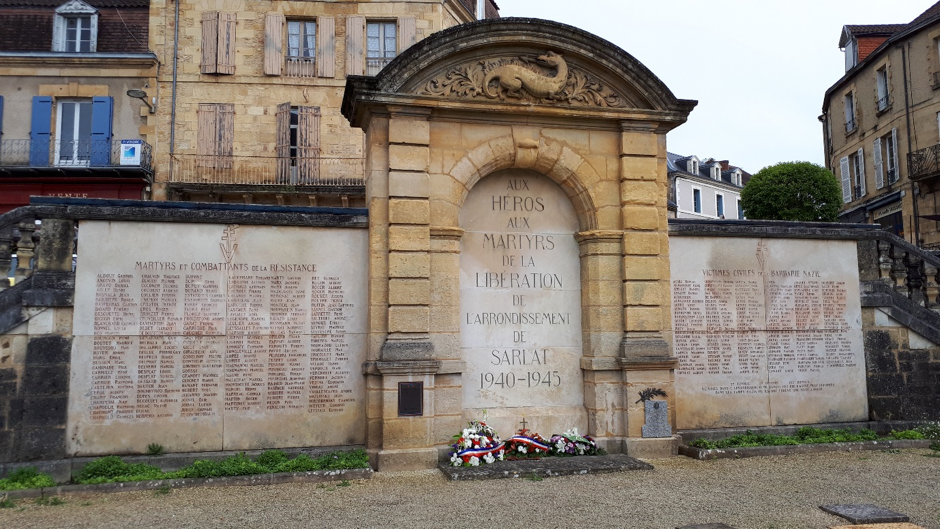 We are reminded that although France collapsed in a matter of days in 1940, there were brave men and women who worked in the following years to liberate their country, at great risk. 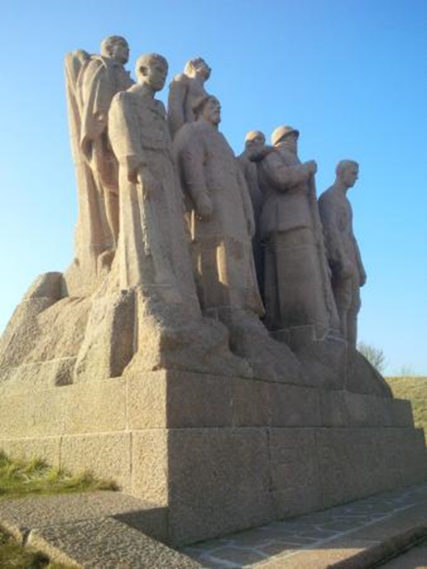 Of the many war monuments throughout the country, one is unique for its terrible realism. It’s called “Les Fantomes”, the Ghosts, by sculptor Paul Landowski.

Landowski is the same sculptor who designed the iconic Christ the Redeemer statue that now stands high above Rio de Janeiro, Brazil.

In this war memorial, which is in a battlefield park about 60 miles from Paris, Landowski wanted to convey the overwhelming loss of so many beloved, and the suffering they endured. In France, the numerical loss was 1.3million who died, and millions more wounded or traumatized for life. The sculptor refused to glorify the killing. He wants us, instead, to feel the unspeakable loss, to think about the toll of war, and perhaps to find a better way.

Our faith announces what God has done in Christ, overcoming the sin that separates us. “God was in Christ, reconciling the world to himself, not counting our sins against us.” It calls us, in turn, to be reconciled to God, and to each other, and to be ambassadors of that reconciliation. 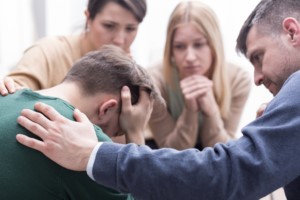 The challenge is always to heal division, to reunite those who are apart, and to comfort those who grieve. Each one of us requires that healing and restoration in our own hearts and lives—circumstances differ, but there is a universal need to be spiritually renewed. Then, in the place where we are, our vocation, our calling, is to care for and comfort those who are in our circle of friends, family, and acquaintances. The ministry of reconciliation is not easy. Sometimes it takes a long journey before we’re truly ready. It can’t be forced. But it is part of Christ’s teaching. 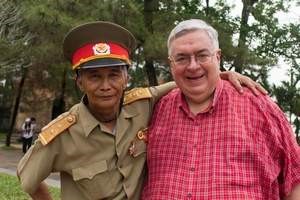 This picture is of two old soldiers, who were sworn enemies decades ago. Now, they have been reunited during a trip to Vietnam. 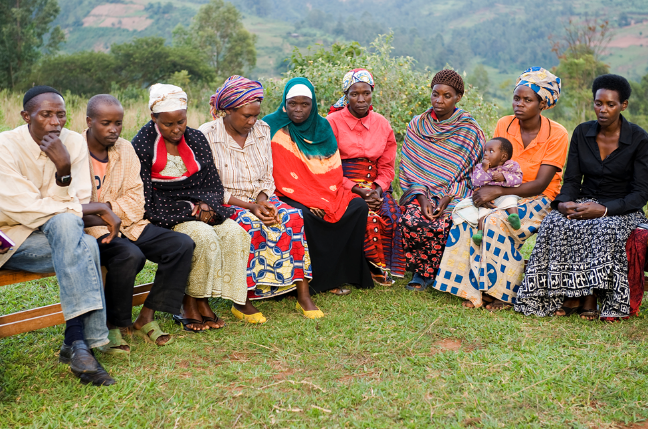 These are people whose lives were affected by the Rwanda genocide of 1994. The awful experience still seems to show in their faces. Yet, progress has occurred in that country, led in part by women entrepreneurs who are helping to lift their country and their people.

The work of peace is ongoing, and it is always our mission. 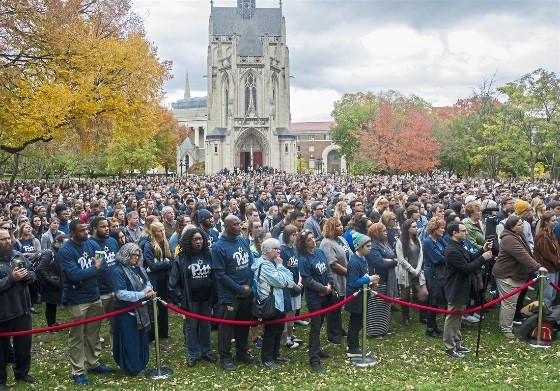 Here, a crowd gathers at the University of Pittsburgh to remember those who died at the Tree of Life Synagogue. The Squirrel Hill neighborhood of Pittsburgh is a place of multicultural understanding and friendliness - and it was literally Mr. Rogers’ neighborhood, for Presbyterian minister, Fred Rogers lived there during his lifetime. The evening after the synagogue shooting, people gathered together spontaneously. They gathered at 6th Presbyterian Church of Pittsburgh, for there was a long-standing positive relationship between the two congregations. One faith group gave over $200,000 as a symbol of solidarity with the Jewish community. That faith group was the Islamic Center of Pittsburgh. Even amidst tragedy, the bonds of unity and reconciliation were visible. 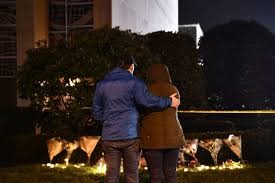 In our time, the scourge of anti-Semitism is on the rise. Can we find the courage to stand with our Jewish brothers and sisters against that terrible tide, and in favor of love? 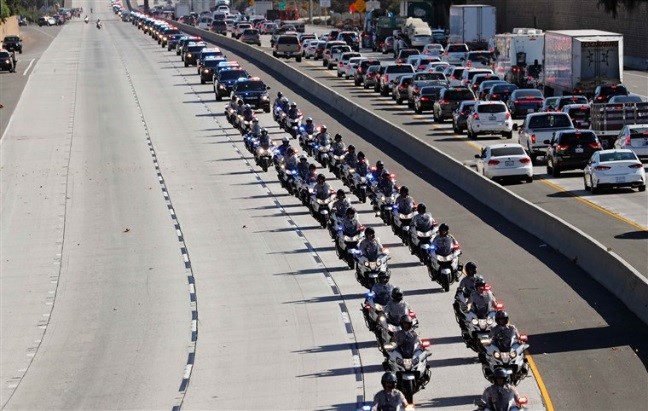 Here, we see a procession for Officer Ron Helus, who heroically acted during the recent shootings in Thousand Oaks CA. As we remember those who gave of themselves, let us also remember those left behind, working to uphold as Lincoln said, the orphans, the widows, and the friends, and all those who have witnessed trauma.

In the city of Lyon, in France, there is a museum of the resistance. 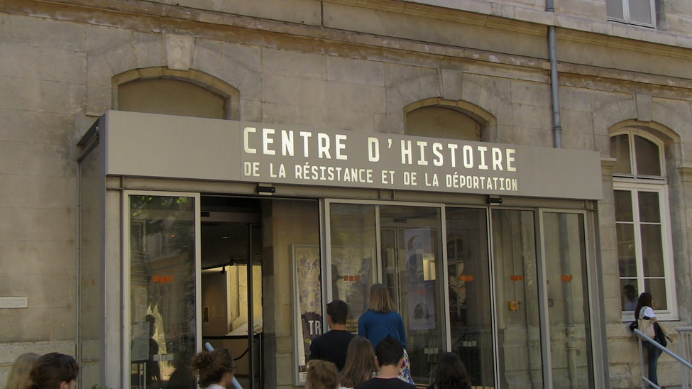 This museum tells of the incredible courage of those who tried to bring light to the terrible darkness of the war years. 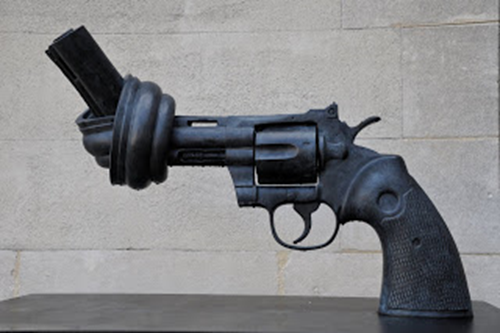 This sculpture is outside the museum. There are several versions of it in France, and beyond. The message is clear. 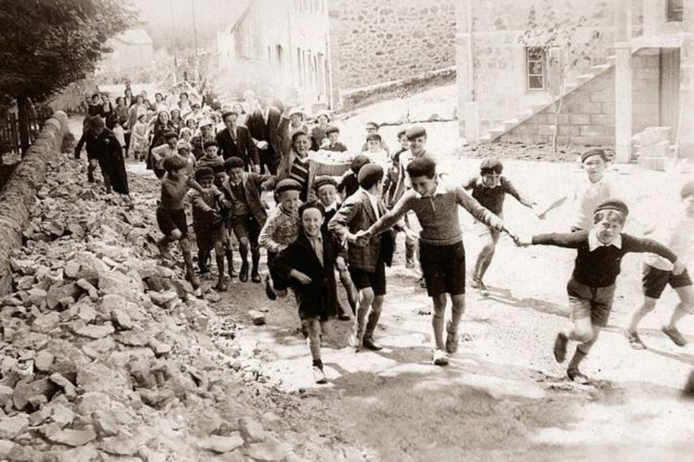 Not far from here, in the mountains outside of Lyon, is a Protestant region where Jewish children and adults were welcomed, and sheltered from those who wished to destroy them. 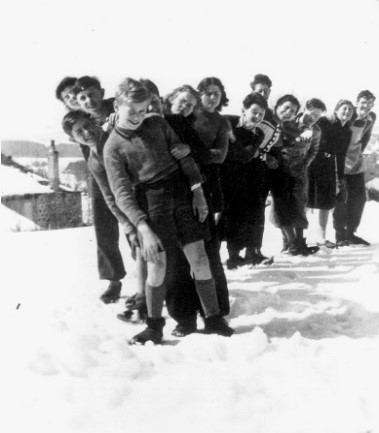 Here we see some of those children. They are smiling and laughing. How can they be having fun under the circumstances? They are able to be young and even joyful, partly because the faith community in this region was determined that they should be given the gift of life and that they ought to have fun. Pastor Andre Trocme stated it as a goal: through all the upset in their lives, let them be children, let them be youth. Let them live. The villages of that area saved thousands of lives. It was a miracle of courage and caring. Amazingly, the area continues to welcome refugees, from the Middle East, and Africa. If a caravan of refugees came their way, they would welcome them in love.

Other examples of extraordinary courage abound. 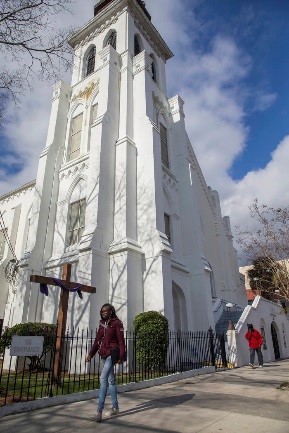 Mother Emmanuel Church of Charleston, SC demonstrated reconciling love to the world after the shooting there in 2015. Their deep faith enabled them to respond to hatred with Christ-like love.

In England, Coventry cathedral was bombed almost out of existence.

But the bombed-out shell remains, and it has been preserved not only as a witness to what happened but as testimony to the desire for reconciliation. Charred beams were found after the bombing, and they formed a cross in the way the fell together. A cross of nails was formed as well. The people and pastors have worked through a center for reconciliation to overcome strife and heal wounds throughout the world. 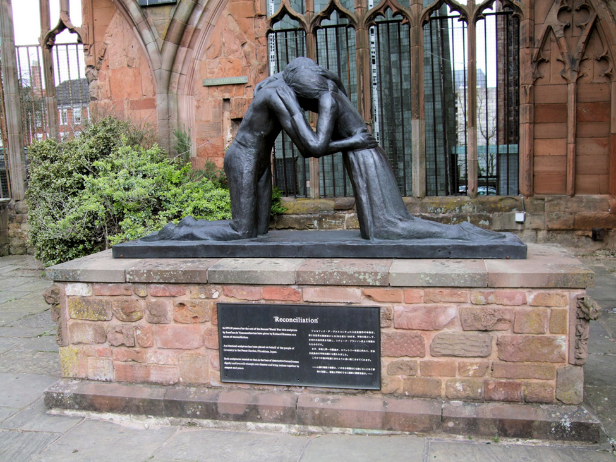 This sculpture outside the bombed-out cathedral speaks to both the grief of loss and the unity that they seek in their work.

In the south of France, a bridge spans a river gorge, bringing together two sides once inaccessible by direct transport. 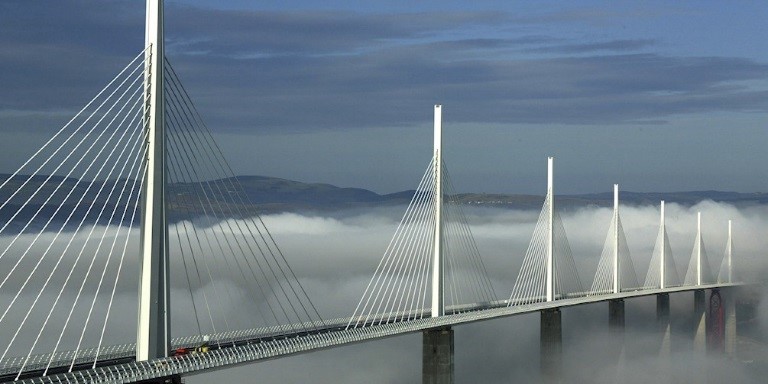 The Millau Viaduct has become famous for its futuristic appearance, and it is currently the tallest bridge in the world (not the highest, but the tallest).  Its function is the same as every bridge: to cross barriers, to bring opposite sides together, to create unity. It is a function similar to our mission as people of faith. Christ is a bridge, and we are meant to follow his example of bringing people together. “In Christ, God was reconciling the world to himself, not counting our sins against us, and entrusting to us the message of reconciliation.” 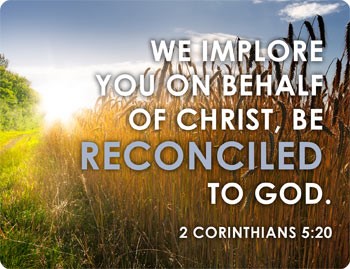 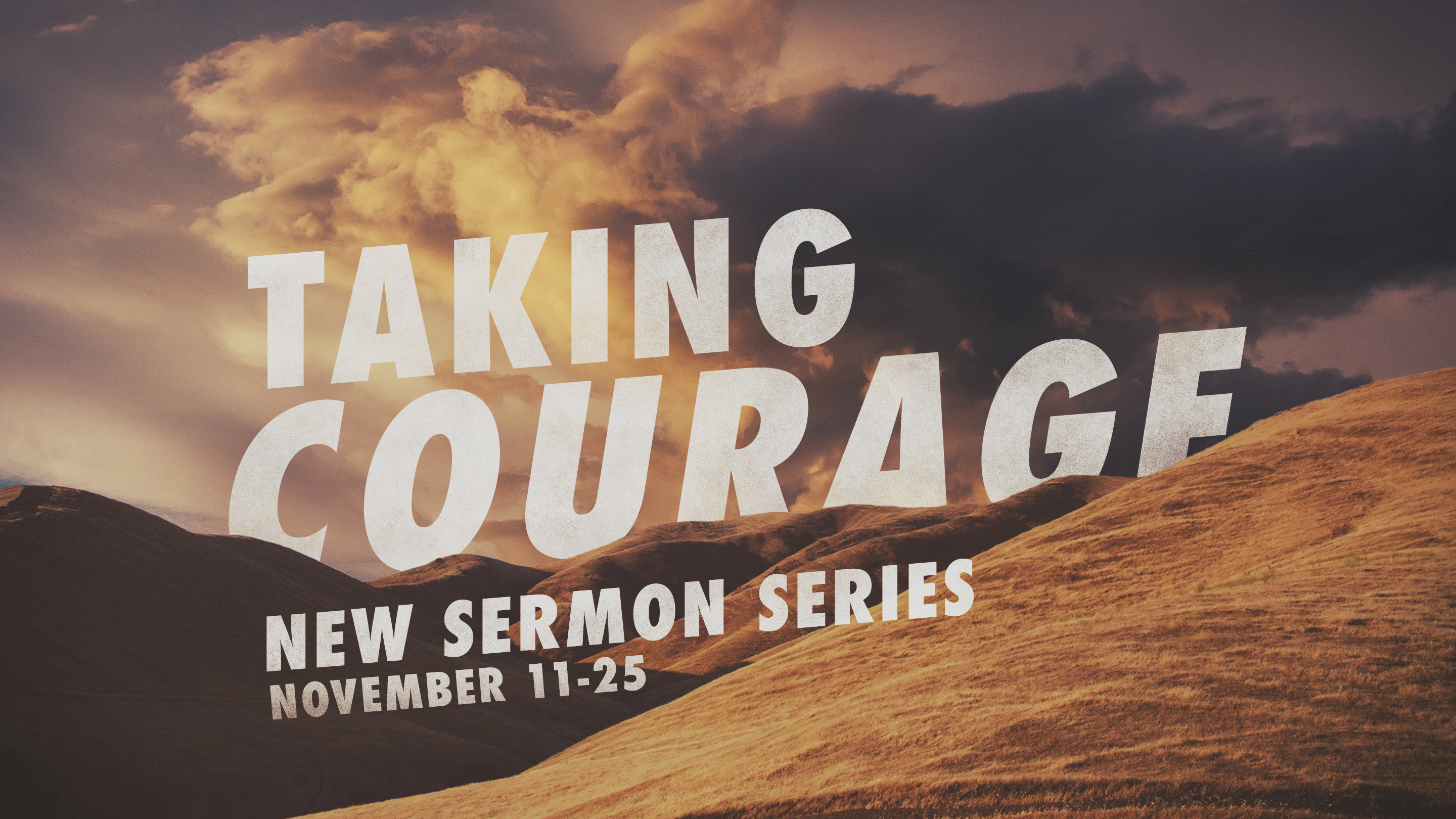 “Be Brave, Give Thanks”