In PA, when I was a Youth Director, I coordinated a youth trip. It was the summertime, so I planned a middle school camping trip. I found a great state park that wasn’t too far away. It had cabins, a dining hall, plenty of recreational stuff, and their signature attraction - the boulder field. So I arranged everything with the park employees and opened the trip up to all my 6th-8th graders. I ended up getting a really good turn-out and I was so excited!

There were a lot of things about this trip that didn’t go as planned. I could tell you about how the park employees neglected to tell me that the cabin beds did not have mattresses. Or I could tell you how we didn’t have any electricity in our part of the campground. I could even tell you about my gross underestimation of the homesickness some of my middle schoolers would experience. But I want to tell you about a hike I planned - during the trip.

I had mapped out a great, scenic hike around an area of the state park. We had just gotten underway when one of my students slipped and appeared to twist their ankle. They wanted to go back to their cabin, so I walked them back and gave my other leaders the map, and told them where to go (and where they’d end up). I thought it was pretty straight-forward. Again, that’s what I thought. After a while, I got a call from one of my adults. They were lost. Apparently, I had gotten my east and west mixed up and they were now somewhere in the middle of the state park. I had led them astray.  We got it all worked out eventually. I put my hobbled student in one of our 12-passenger vans and spent the next 30 minutes or so driving up and down one of the gravel roads honking the horn until we found each other.

In the end, the trip was a lot of fun and became the source for a lot of good memories and plenty of laughs for years to come. But, it taught me more than a few valuable lessons, one of which was just how easy it is to be led astray. As we continue in our “Incomplete” message series, we’re going to look at a church that struggled with being led astray. We’re in Revelation 2:18-29.

So the church we are exploring this morning is in a place called Thyatira. Compared to the other locations we’ve looked at, Thyatira was incredibly unremarkable. It served primarily as a military outpost and a trading way station. They had a few temples but no real established government centers. In all honesty, Thyatira was more like one of those small towns you pass on the highway, rather than a major destination. Even still, there was a gathering of Christ-followers there and their presence and identity were prominent enough that they were addressed by Christ along with the other churches.

Jesus opens up with encouraging this group of Christ followers for what they’ve been doing. He tells them that He knows their deeds, what they’ve done. He has seen their love and their faithful endurance and their service to others. And Jesus even adds in - that this group of believers is doing more now than they did at first. So they are growing in their faith.

And then we get to verse 20 and a familiar sentiment we’ve identified in this series: “Nevertheless, I have this against you.” Christ sees something happening in this community of Christians that worries Him, so He addresses it. We’re at the halfway mark of our “Incomplete” series, so I feel like it’s important for us to reorient and remind ourselves why Jesus seems to have such issues with the churches we are reading about. Because, it would be easy to start to think of Jesus as this harsh task-master with impossibly unreasonable standards, who is just looking for a way to chastise us. But that couldn’t be further from the truth of why Christ corrects Thyatira, the other churches of Revelation, and even us.

And that is exactly why Jesus calls out the people in Thyatira. They are a group of Christians with incredible potential and have already come so far, but, they are being led astray. We’re told that they tolerate the self-appointed prophet, Jezebel and that she has misled Christ’s servants into a whole host of behaviors and thinking that is destroying them from the inside out. Right off the bat, when we hear the name Jezebel, we should be wary. It’s not a name you generally hear spoken with a warm and friendly tone of voice. And for good reason. In the Old Testament, back in the books of Kings, we read how she hunted down and killed the Lord's prophets and did everything in her power to replace the worship of God with the worship of false idols and to plunge God’s people into a state of disoriented, rampant disobedience.

Now, it is obvious that the woman “Jezebel” (being talked about here in Revelation) is not the original Jezebel and probably isn’t named Jezebel. Instead, her name is being used as a title to describe what it is happening to God’s people in Thyatira. The results are pretty similar to the Old Testament events though. Christians, in this small, crossroads town, are being led astray by something and being led into behavior that is completely contrary to a people desiring to be associated with Jesus Christ.

We hear reference to sexual immorality and adultery. These made up the same bait that the Old Testament Jezebel used, and now, Thyatira was being caught up by these acts as well.

I mentioned this a few weeks ago when I lead the Screwtape Letters class that’s happening between services. Sex is not an evil or sinful thing in and of itself. It was designed by God just as we were designed by God. And within God’s design, sex is absolutely nothing to be ashamed of. But what’s happening in Thyatira is not that. God’s people are committing adultery for one thing. They are betraying their marriage vows and breaking the command of God. Forget what you might see from time to time on TV shows or in movies or romance novels, adultery is never within God’s will. But it’s not just that, Jesus calls Thyatira out for sexual immorality. That term can be used to describe a whole host of things, but it’s all encompassed in this: engaging in actions that are outside God’s design for sex. This is not a message about biblical sexual ethics, so let me just share some good words from Craig Keener, a pastor, scholar, and Ph.D. in New Testament Studies:

“Biblical sexual ethics require us to save our bodies for those who will value us not for a small fee but who will regard us as persons of worth equal to themselves, and commit their lives to us.” Commitment, consideration, sacrifice. These are all the ingredients of marriage. And they were everything the folks in Thyatira were missing. But the question is how. How did this group of promising Christians get led astray?

The answer to that, my friends, is something I think we all can relate with. In Thyatira, everything ran through trade or service guilds. These groups were like a more extreme form of unions and they controlled virtually all of the economy and livelihood of the town. If you did not belong to one, if you didn’t buy into their customs, you were likely in bad shape. The troubling reality was, many of these guilds used practices like a sacrifice to foreign gods and what we’ll call wild and crazy parties in their business models. Many of the Christians in Thyatira had been led astray and bought into the lie that if they wanted the good life, then they needed to loosen up and skimp on their Christian values in order to do so. And so, we hear the words of Christ.

We might not be caught up in trade guilds like Thyatira or under the influence of flashy folks named Jezebel, but we’d be mistaken if we assumed we were all that different from the Christians In Thyatira. They were being led astray by the demanding voices of their day. There are demanding voices today that might go by different names, but lead to the same place. The American Dream, maybe? Work as hard as you can so you can make as much money as possible and get all the stuff or experiences you want. It’s not about the white picket fence anymore. It’s a rat race to see how much you can accumulate in the fastest way possible. The problem with that is - you end up looking more like a crazed Black Friday shopper rather than a compassionate ambassador for the love of Christ.

Social circles might not always have the same financial grounding, but they offer the same threats as the guilds of Thyatira. And the most malicious aspect of this is that we are immersed in them as kids. The need to fit-in and the crushing weight of peer pressure can have teens saying, doing, and becoming things they never intended, let alone what parents had envisioned. And we all know those deceptive demands don’t stop when we’re grown.

When all is said and done, we face the same threat of being led astray just as the Christians in Thyatira did, even if we use different names for them. All of those voices (career, wealth, social status, etc.) they all promise us the world but leave us empty and further from our Creator than we ever thought possible. A large bank account does not make up for a life empty of relationships. Being accepted by the masses doesn’t cure the sting of lacking the presence of someone who truly knows you. Being successful means little if our morality and integrity are in tatters as a result. This is what Jesus is talking about in our reading from the Gospels this morning. What good is it to gain the world, whatever that might mean to you, but lose your soul? That is what Jesus accuses the church of in Thyatira. So how do we avoid the same problem? Or, if we’re already caught in it, how do we get out of this cycle? William Barclay, again, gives us some good advice.

Sometimes the most faithful thing we can do in pursuing Christ - takes one small step at a time. It could be a small step away from something we know is leading us astray. Or it could be an intentional step toward Christ. My encouragement to you this morning - is to determine what your next small step can be. What thing, habit, or maybe even person do you need to take a step away from? What would it look like for you to make a step towards Christ? More time in His Word? Finding a place to serve? It might be different for each of us, but it is the only sure way to keep us from being further led astray. 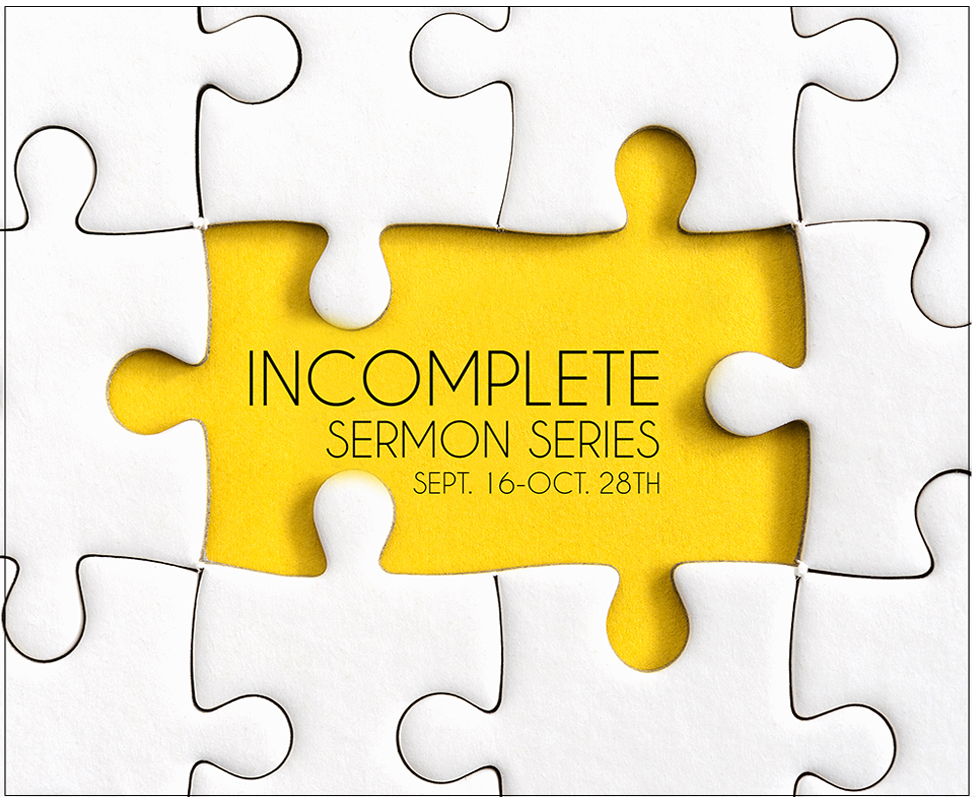