The popular quote says that insanity is doing the same thing over and over again and expecting different results. There’s a lot of speculation concerning where exactly this statement came from. Benjamin Franklin, Albert Einstein, various NFL coaches…it doesn’t seem anyone really knows. But regardless of who said it, the truth remains. We eventually come to a point, where we recognize the need for some form of change. It could be with our job, a relationship or our waistline. And when the need for that change becomes more disruptive than the status quo, we are compelled to do something. And that inevitably means initiating several other changes. If we want to improve our career status we might go back to school, or go into a new field. If we want to improve our health, we might exercise more or change our diet. If we’re hoping to deepen the relationships we have, we might prioritize our time differently, or maybe limit the screen time everyone gets in the house. The bottom line is, something isn’t working, and in order for it to start working, the process between here and there has to go in a new direction. I thought about this a ton today.

As many of you know, baseball is back, and every team is playing today. My own Philadelphia Phillies have been stuck in one doozy of a rut for the last 10 years. Cubs fans, you can feel me on this. But this year, the Phillies have a new manager, a new front office, and a new roster, full of young, exciting players. Phillies fans, like me, are excited and optimistic because there’s something different going on, and we’re praying the team is going in a new direction.

But this reality, changing things to create a better outcome, doesn’t only apply to baseball teams, diets, or career changes. It also applies to our faith as believers in Jesus Christ. In fact, Jesus Himself embodied and practiced this reality. He even taught it to his closest friends and followers. We see this in the text most-often associated with Maundy Thursday when Jesus washed the feet of his disciples. I want to read that for you again, so we can hear first-hand what Jesus did, and why it means so much and reaches so far. We’re in John 13 and I’ll be reading verses 1-17.

Alright, so this might be a part of Jesus’ story that we’re familiar with. The foot-washing is probably something we have at least heard of. I can say one thing for sure: of the places where I have served in ministry, this passage is thought to be better reflected ON, rather than practiced. Washing another person’s feet doesn’t exactly fit into our idea of a delightful church experience. It’s not something we do this day and age, it can be pretty awkward, some might even say it stinks (foot joke). And don’t worry, I’m not going to finish my message tonight with an invitation for us to do a foot-washing. But even if we might not need to replicate the physical actions of Jesus here, there is still a great deal we can apply and put into practice in our lives.

When we come into this intimate gathering, we are witnessing a moment where Jesus shares, perhaps, one of the most revolutionary aspects of His identity, and one of the most reaching and challenging elements of the call and purpose given to all Christ followers. It comes at a troubling time. We’re told that Jesus knew what was coming next. His time was approaching. The cross was drawing near. But there was still more to be accomplished, more to be shared with the ones Jesus loved and trusted. And so he stood, and with a series of seemingly simple and ordinary motions, Jesus showed the world that leadership and authority needed to go in a new direction.

Jesus washed the feet of his disciples, his followers. Today, foot washing has become more a ceremonial or spiritual practice within Christianity. It is no longer a practical necessity of society. But in the time and culture of the New Testament, it was a bothersome obligation. As you would travel the paths and roads of New Testament geography, you would do so most likely wearing a form of a sandal. As you traveled, your feet would pick up the dust and dirt of the roads. Your feet would sweat, which would create moisture, which would mix with the dust and dirt, and result in caking your feet in an uncomfortable and unsightly mess. And that was assuming you hadn’t walked through or stepped in anything else.

When you would arrive, it was customary for the host to ensure the visitors had their feet washed and cleaned. If nothing else, a basin of fresh water was made available. Those of highest esteem and importance were tended to first. And on the flip side of this custom, it was generally the lowliest of servants who were given the task of washing the feet. It is likely a nose-turning practice for those of us here, wearing socks and shoes. In the time of Christ, it was the lowest of servant tasks.

Now, knowing what we do about foot-washing during that time, and holding it besides what we know about Jesus, it shouldn’t be hard for us to see why Peter had such an issue with this, and more to the point, why what Christ did was so unexpected, and even perceived as shameful. Jesus essentially took all of the understood metrics and practices of authority and leadership and turned them upside down on their head.

Christ was, as He is now, and has and will forever be, in the highest possible position of authority and honor. Even in the context of this gathering in our passage, Jesus was the rabbi, and the disciples were just that – disciples, acolytes, learners. They had willingly put themselves under His direction and authority. And yet, Jesus comes and performs a service for them that is of the lowest quality, in order show them a change that must take place. In order for these individuals to become the vessels and voices for all who would follow in the heart and teachings of Jesus, they have to be shown a new direction of leadership and authority.

It was controversial and problematic then. Even Peter, Jesus’ right-hand man, took issue with it. And then, when he got past that, he missed the point entirely, and had to have it explained to him. Jesus’ display and definition of leadership, authority, and service, was such a paradigm shift that it was missed by His closest friends. But in this seemingly degrading display of servant leadership, Jesus shows His followers – the disciples there and all of us here – what is required of us.

Henri Nouwen, perhaps one of the warmest and yet most compelling Christian voices of this age, describes this new direction of leadership in his book: In the Name of Jesus. He says, “The way of the Christian leader is not the way of upward mobility in which our world has invested so much, but the way of downward mobility ending on the cross.” He continues, “Here we touch on the most important quality of Christian leadership in the future. It is not a leadership of power and control, but a leadership of powerlessness and humility in which the suffering servant of God, Jesus Christ, is made manifest.”

Nouwen describes a truth that Jesus embodied, but that I believe many of us are terrified of. This world tells us what we deserve, and offers to us what we are told is a non-negotiable way of leadership and hierarchy. We are told that we work hard, and strive, save, and sacrifice, so that we can move up. In our careers, in the size of our home, in the numbers reflected on our bank statements. We are forced into participating in an upward motion so that we can do less and have more. Serve your time now so that someday you can be served. But that is not the way of Christ. Jesus says different, He does differently. Jesus reveals a better way, a new way.

If we want to be blessed, Jesus tells us that we are called to serve and not be served. Our focus should not be on ourselves and our own good and our own feelings and our own desires. Instead, we need to focus our energy and time outwardly. If we recall the timeframe within which Jesus performs this revolutionary act of service, we should be given pause to any complaint or rebuttal we might try to muster. Remember, Jesus realizes that his time has come and that his journey to the cross is now set to begin. In the most desperate and terrifying of times, in a moment where Jesus should have only been focused on his own safety and his own life, he thinks of his friends, and the lesson they must come face-to-face with.

Too often we are focused inwardly, and really only bluster when our norms or our preferences are tested. This is true in many areas of our life, even ones where you would think it wouldn’t. We focus on protecting, defending, or scrapping for our own desires, with an aim at reaching our level of comfort or satisfaction. This is true even in the church. What is meant to be a house of compassion, can quickly be reduced to one of merely complaining.

What if we tried this new direction? What if we reflected on this display of leadership given to us by Christ, and instead of worrying about our own comfort, we fixed our attention on how best to serve others. To do good. To be like our Savior who chooses to tie a towel around his waist, instead of fixing a golden crown to his head? What if we began orienting our lives in this new direction in our marriages, in our homes, at our workplaces, in this church, in our neighborhoods? Imagine the possibilities of what could occur if we worked tirelessly to serve instead of expending all we have trying to be served. Imagine if we went and worked and lived as Christ taught, holding the feet of his followers. Imagine what could happen if we all went in a new direction? 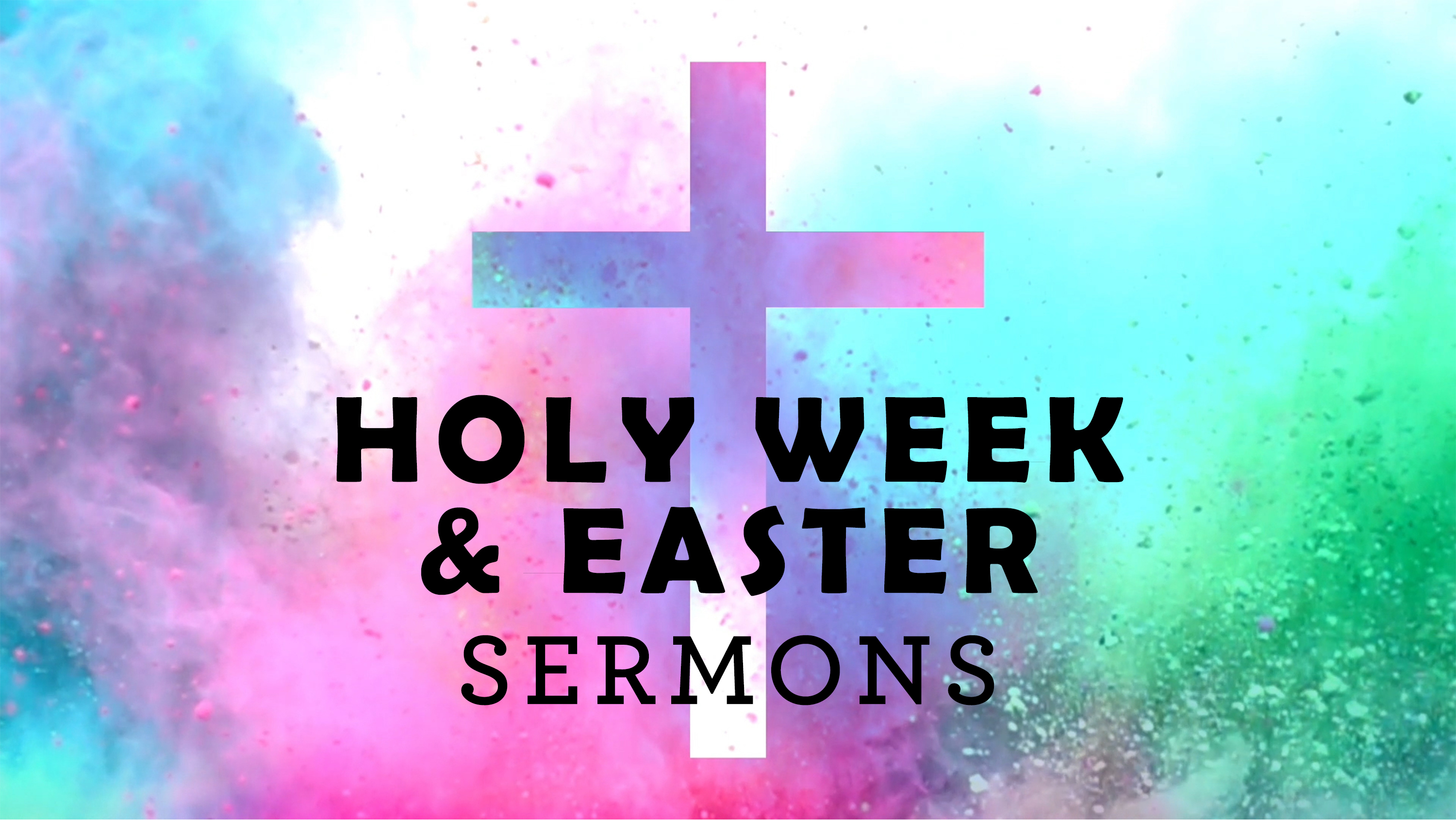 6:30am Easter Sunrise: "The Whole Story"

11am Easter Service: “Missing the Obvious”